BEIJING, Nov. 15, 2022 /PRNewswire/ -- The city of Changzhou, in east China's Jiangsu Province, ranked the fifth in the 2022 Hurun China New Energy Intensity City list, which was released during the 2022 World Industrial and Energy Internet Expo held in the city from Nov. 11 to Nov. 13. 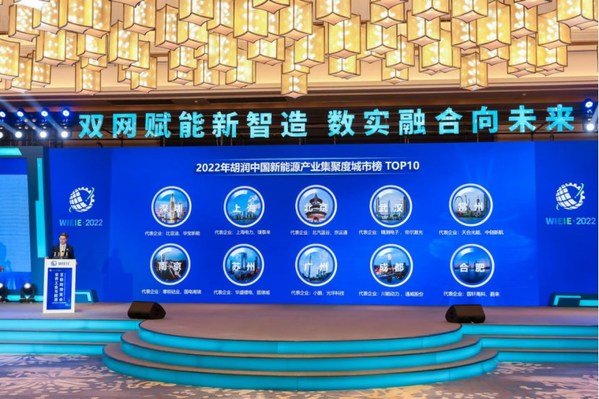 Photo shows the release of the 2022 Hurun China New Energy Intensity City list at the the 2022 World Industrial and Energy Internet Expo, which was held in east China's Changzhou city from Nov. 11 to Nov. 13.

According to the Hurun Research Institute, factors of the intensity of leading enterprises, small-and-medium enterprises (SMEs) and investment in terms of the field of new energy were considered when rating all levels of cities in China to compose the list.

Among the top ten of the list, Changzhou is the only second-tier city with a GDP less than a trillion yuan (about 142.2 billion U.S. dollars), while others ranked before it are all first-tier cities, including Shenzhen, Shanghai, Beijing and Wuhan, which reflects that Changzhou has attached great importance to the new energy industry, said Rupert Hoogewerf, or Hu Run in Chinese, Chairman and Chief Researcher of Hurun Report.

Hu Run accredited the miracle to the "industrial ecology" of new energy constructed by Changzhou, which others cannot easily copy.

In recent years, Changzhou has seized the opportunities brought by new industries and the integration of digital and real economy, building an ecological framework with Changzhou characteristics. New energy has become a signature industry of Changzhou where more than 3,400 enterprises on the NEV industrial chain are located.

Chen Jinhu, Secretary of the CPC Changzhou Municipal Committee, noted that the city has made a development blueprint for the future of its new energy industry with two major goals. One is to realize over a trillion yuan of industrial output in the city's new energy sector by 2025, and the other is to achieve a market value of over a billion yuan in the sector in capital market during the same period.