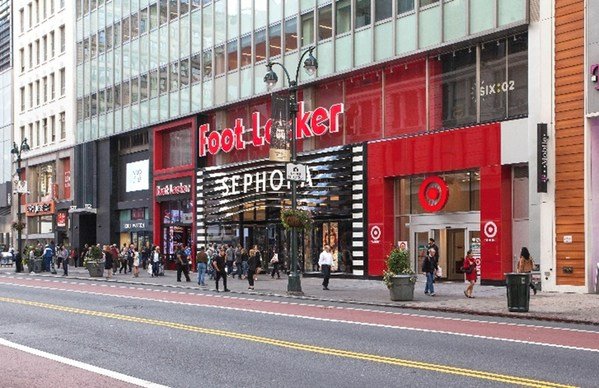 Located opposite Macy's and one block west of the Empire State Building, Pandora will join Sephora, Target, and Foot Locker at the nexus of the 34th Street shopping corridor.

"The retail brands at 112 W 34th Street are some of our best performing stores based on store foot traffic and retail sales," said Fred C. Posniak, SVP, Leasing at Empire State Realty Trust. "We are pleased to bring another great brand to the ESRT portfolio."

More information about 112 W. 34th Street can be found online.

Empire State Realty Trust, Inc. (NYSE: ESRT) is a REIT that owns and manages office, retail and multifamily assets in Manhattan and the greater New York metropolitan area. ESRT owns the Empire State Building, the World's Most Famous Building, and Tripadvisor's 2022 Travelers' Choice Best of the Best Awards #1 attraction in the U.S. and #3 attraction in the world, the newly reimagined and iconic Empire State Building Observatory. The company is a leader in healthy buildings, energy efficiency, and indoor environmental quality and has the lowest greenhouse gas emissions per square foot of any publicly traded REIT portfolio in New York City. As of September 30, 2022, ESRT's portfolio is comprised of approximately 9.2 million rentable square feet of office space, 700,000 rentable square feet of retail space and 625 residential units across two multifamily properties. More information about Empire State Realty Trust can be found at esrtreit.com and by following ESRT on Facebook, Instagram, Twitter and LinkedIn.

This press release contains forward-looking statements within the meaning of the Federal securities laws. You can identify these statements by our use of words such as "assumes," "believes," "estimates," "expects," "intends," "plans," "projects" or the negative of these words or similar words or expressions that do not relate to historical matters. You should exercise caution in interpreting and relying on forward-looking statements, because they involve known and unknown risks, uncertainties and other factors which are, in some cases, beyond ESRT's control and could materially affect actual results, performance or achievements. Such factors and risks include, without limitation, the current public health crisis and economic disruption from the COVID-19 pandemic, a failure of conditions or performance regarding any event or transaction described above, regulatory changes, and other risks and uncertainties described from time to time in ESRT's and ESROP's filings with the SEC, including those set forth in each of ESRT's and ESROP's Annual Report on Form 10-K for the year ended December 31, 2021 under the heading "Risk Factors." Except as may be required by law, ESRT and ESROP do not undertake a duty to update any forward-looking statement, whether as a result of new information, future events or otherwise.