BOSTON, Nov. 8, 2022 /PRNewswire/ -- Dr. Branden Ryu, CEO and Founder of BIORCHESTRA Ltd. (S. Korea), was a featured speaker at a plenary session of the RNA Leaders Congress USA in Boston, MA, on October 18th, 2022. Dr Ryu focused on the new efficacy data of their leading compound, BMD-001, derived from studies in non-human primates that demonstrated clearance of both amyloid-β and tau pathological proteins.

RNA Leaders USA focuses on the scientific, clinical and commercial development of RNA therapeutics and vaccines. The meeting brings together the most senior executives to deliver updates from across the full RNA landscape (RNAi, antisense technologies, small molecule targeting, mRNA, and more). In addition to Dr. Branden Ryu, other senior leaders present represented Ionis, Alnylam, Sanofi, Bayer, Eli Lilly, Astra Zeneca, Roche, and a number of emerging biotech companies. A particular focus of the meeting was the challenge of delivering RNA-based therapeutics to specific organs, in particular to the brain.

In his talk, Dr Ryu presented data generated in collaboration with the National Primate Research Center of the Korea Research Institute of Bioscience and Biotechnology. Using a primate disease-induction model of Alzheimer's disease, BIORCHESTRA was able to demonstrate brain target (microRNA-485-3p) engagement by intravenously administered BMD-001, and subsequent clearance of both amyloid-β and tau proteins. Thus, it was again confirmed, this time using a primate model of Alzheimer's disease, that BIORCHESTRA's Drug Delivery System (BDDS™) penetrates the blood brain barrier and delivers to the relevant cell types to ameliorate neurodegenerative changes. The data further demonstrated widespread distribution of BMD-001 into the cortex, bulbar and cord regions.

In the conference presentation, Dr Ryu stated: "The encouraging results of this experiment are that the intravenous injection of our BDDS™ can deliver drugs broadly in the CNS: to the frontal lobe, thalamus, hypothalamus, striatum and hippocampus, as well as to the spine." He further added: "This experiment confirmed the biodistribution data previously established in the non-human primate but, in addition, the efficacy of BMD-001 established in smaller animal disease models is now confirmed with an efficacy read-out in the non-human primate. This gives us confidence that our brain delivery platform is scalable to the human context", he concluded. 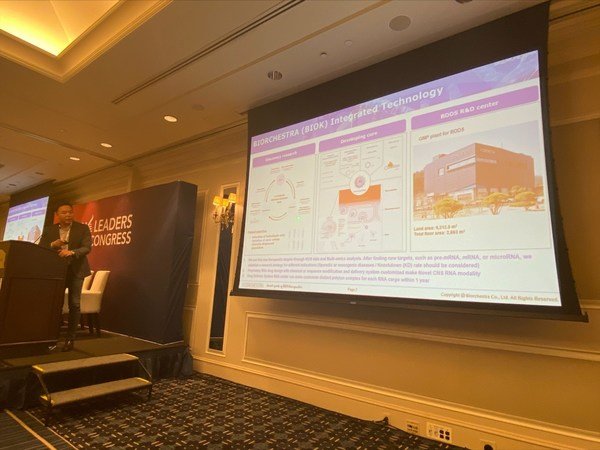 BIORCHESTRA is a South Korean-based biotechnology company focused on the treatment of neurodegenerative disorders such as Alzheimer's Disease and amyotrophic lateral sclerosis (ALS), or Lou Gehrig's Disease. BIORCHESTRA was founded in 2016 by Dr. Branden Ryu based on his doctoral and postdoctoral work in this field.

The most advanced drugs in the BIORCHESTRA pipeline focus on neurodegenerative diseases and target a key regulator of neuroinflammation and neurodegeneration, microRNA-485-3p. Other programs focus on CNS oncology and genetic brain disease, such as Huntington's Disease.

BIORCHESTRA Participated in Formulation and Delivery

Sirnaomics to Present the Latest Developments of Dual-Targeted RNAi Therapeutics based on its Proprietary GalAhead™ Program at the 4th Annual RNA Therapeutic: From Concept to Clinic Symposium