SEOUL, South Korea, Nov. 8, 2022 /PRNewswire/ -- STRADVISION, an AI-based vision perception technology company, has announced a strategic company reorganization that introduces respective Account Management and Sales Engineering teams. This continues the company's evolution and efforts to further serve automotive customers through increased sales power from both the commercial and technology perspective. Each customer will now have dedicated account managers / directors and solution engineers to ensure long-term strategies and planning as well as influence on the STRADVISION product roadmap to customize the individual customer needs. 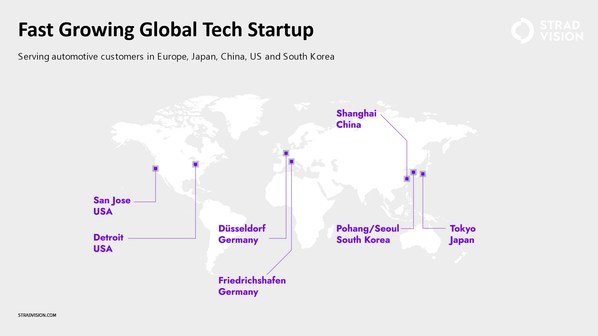 Their new appointments exemplify the continued and rapid growth for the company's global staffing and follow the recent hirings of both Bapu Kiranagi (Solution Engineering Director) and Dean Beckman (Sales Director) at STRADVISION's Detroit, Michigan subsidiary.

"I look forward to helping shape STRADVISION's German and global customer relationships," said new Head of Sales Engineering German Etlender. "My main objective will be to technically promote our products to current and prospective automotive customers as we collaboratively aim to achieve autonomous driving levels 3 and 4 and beyond."

New Senior Solution Engineer Yihe Zuo added, "There is so much potential within the AI space and vision perception to raise the capabilities behind ADAS and autonomous driving. STRADVISION has established itself as a true pioneer leading in the field, and I am very excited to join their very talented global staff as we support our customer projects and drive forth innovation."

German Etlender brings his 11+ years of engineering experience to the STRADVISION team. This includes prior positions with different Tier-1s, and recently as the Team Lead for Systems Engineering (LIDAR & Camera) at Magna. Areas of expertise have included requirements engineering, systems engineering (e-mobility and charging), autonomous parking functions and algorithms, and team management. His education background includes a Master in Mathematics and Minor in Mechanical Engineering from Paderborn University.

Yihe Zuo joins STRADVISION with over 15 years of engineering experience, including 8+ years among automotive industry OEMs and Tier-1s. His focus areas have included ADAS perception software development, embedded software / application algorithm development, product strategy, software team management, and multiple research contributions. His academic achievements have included a Ph.D. in Vehicle Engineering from Beijing Institute of Technology, as well as being an Exchange Ph.D. student at Johns Hopkins University with a Major in Medical Robotics and Imaging.

STRADVISION's team reorganization and the above new appointments continue a big year for the company's workforce (69.2% increase YoY) both in North America and globally. The company also completed its Series C funding of $88 million ($129 cumulative funding to date), and have recently unveiled a rebranding and updated company vision that will extend the implementation of its innovative Vision AI software to industries even beyond automotive. Additional 2022 milestones have been the successful completion of proof-of-concept (PoC) and production projects that are working toward more mass production with global OEMs and Tier-1, and STRADVISION's SVNet software being once again selected as the 'Best-in-Class Software for Perception Systems' during the 2022 AutoSens Awards in Brussels, Belgium.

Founded in 2014, STRADVISION is an automotive industry pioneer in AI-based video perception technology for Advanced Driver Assistance Systems (ADAS). The company is accelerating the advent of fully autonomous vehicles by making ADAS features available at a fraction of the market cost compared with competitors. STRADVISION's SVNet is being deployed on various vehicle models in partnership with OEMs and powers ADAS & Autonomous Vehicles worldwide and is serviced by over 300 employees in Seoul, San Jose, Detroit, Tokyo, Shanghai, Friedrichshafen, and Dusseldorf. STRADVISION has been honored with the Gold Award at the 2021 and 2022 AutoSens Awards for Best-in-Class Software for Perception Systems, and the 2020 Autonomous Vehicle Technology ACES Award in Autonomy (Software Category). In addition, STRADVISION's software is certified to the ISO 9001:2015 for Quality Management System and ISO 26262 for Automotive Functional Safety.