SHANGHAI, Nov. 4, 2022 /PRNewswire/ -- The 2022 Head of Shanghai River Regatta was held last weekend on the "Oriental Rhine" Suzhou Creek, a tributary of the Huangpu River passing through downtown Shanghai. The sports event will further lend steam to the city in its drive to become a globally famous sports metropolis with worldwide influence. 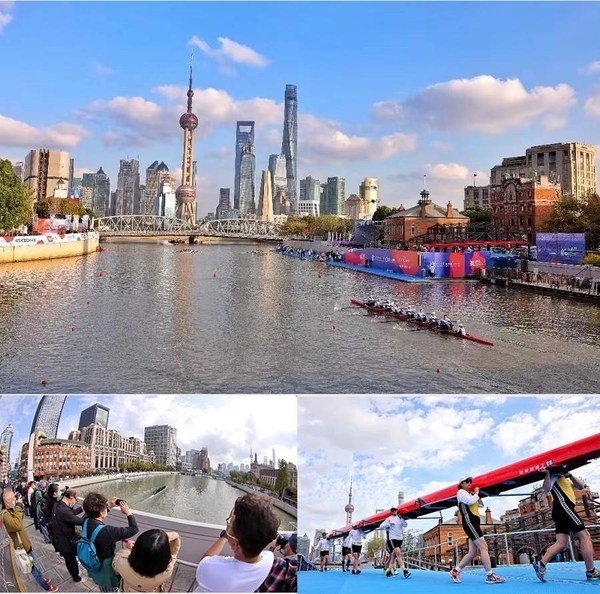 The 2022 Head of Shanghai River Regatta was held last weekend on the "Oriental Rhine".

Rowing has a history of 100 years in Shanghai. Nowadays, the integration and quality improvement of the waterfront public space of the Huangpu River and Suzhou Creek provide a good platform for the rowing event. The Head of Shanghai River Regatta is not only a sports event, but also an excellent opportunity to showcase Shanghai's urban development and river management.

The two-day event included a 4.2-kilometer chase and a 500-meter city dash. It attracted over 40 participating teams, each consisting of eight rowers. They competed in three divisions -- professional, college teams and clubs. Over 10 individual rowers from clubs also raced during the event.

The Huangpu River and Suzhou Creek carry the past, present and future of Shanghai. Shanghai is gradually creating a "One River and One Creek" healthy public space, and exploring a new model of integrating landscape space and health features in large cities.

Rowing has close ties with universities. In 2021, the university rowing team participated in the Head of Shanghai River Regatta, demonstrating the spirit of unity, progress and solidarity of Chinese college students.

"We are all very encouraged to win the championship, and excited to compete in such a beautiful environment at home," said Hu Huiming, captain of the rowing team of Shanghai Ocean University, which won the men's eight-person single-oar 4.2 km chase with helmsman in the college division.

It's expected that by hosting more top-level events, more people can learn about events like rowing and participate in them, according to Luo Wenhua, deputy director of Shanghai Administration of Sports, adding that people's physique and mentality will be nourished during sports.

Heart of the Min River -- Creating a New Landmark in the Modern, International Metropolis of Fuzhou

The 2022 Yangtze River Culture Festival kicked off in Zhangjiagang