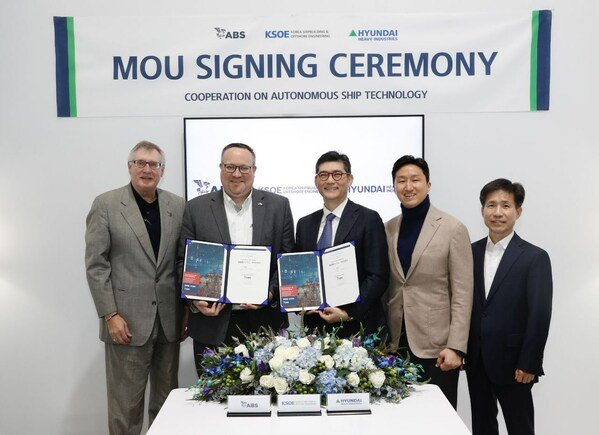 "We plan to cooperate with ABS on the AI-based LNG fuel propulsion system (Hi-GAS+) demonstration project that won the CES 2023 Innovation Award," said Sungjoon Kim, SEVP and head of KSOE's Advanced Research Center. "Through the MOU, we hope to further extend our lead in unmanned technology, that enables autonomous navigation and self-diagnosis of equipment and safety."

ABS is one of world's leading ship classification organizations that contributes to the stable growth of the shipbuilding and maritime industry by setting standards for safety and technological excellence for ships and offshore structures.

The two parties plan to demonstrate KSOE's machinery automation system (HiCBM) and onboard integrated safety control system (HiCAMS) on actual ships for the first time globally by 2024. HiCBM and HiCAMS are AI-based solutions that allow ships to self-diagnose the condition of machinery and equipment within the ship such as engines and generators, and automatically recognize and respond to unexpected situations such as fire. KSOE obtained approval in principle (AIP) for the two systems from ABS in September 2022.

The two will work to bring a successful demonstration of the two systems which will mark the realization of the world's first unmanned large merchant vessel ship capable of operating for long periods without the assistance of a navigator, engineer or even a deckhand.

"ABS is leading the industry in supporting autonomous projects and assisting pioneers like HD Hyundai and KSOE. Autonomous technologies that are fully integrated within the broader vessel infrastructure have the potential to increase safety by reducing human error," said Patrick Ryan, ABS Senior Vice President, Global Engineering and Technology.

In June 2022, HD Hyundai's subsidiary Avikus, installed the autonomous navigation system on a large merchant ship and succeeded in crossing the ocean for the first time in the world.

HD Hyundai is the world's largest shipbuilding and heavy industries conglomerate. HD Hyundai started as a shipbuilder in 1972 in a small fishing village in Ulsan, the southeast of South Korea. On the foundation of solid leadership in the shipbuilding industry, it is now progressing to become the most innovative solution provider in the heavy industry and energy sectors, ranging from shipbuilding, offshore engineering and construction equipment to the refinery, petrochemical, and smart energy management businesses. Marking its 50th anniversary, the group was renamed to HD Hyundai to change the paradigm of traditional shipbuilding industry and emphasize its presence in other industries.