The dog identifying app, CES 2022 Best of Innovation Honoree, has made a return to CES

SEOUL, South Korea, Jan. 8, 2023 /PRNewswire/ -- Petnow Inc. announced that it is presenting the world's first cat biometric recognition service added to the Petnow app at CES 2023. The AI-driven app that automatically scans unique identifiers of dogs called "nose prints" has been honored with the Best of Innovation at CES 2022, and the company has attracted worldwide recognition and has been featured on BBC and CBS. 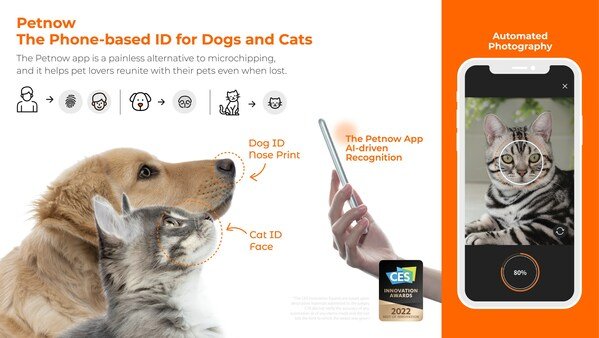 The Petnow app: the first app to identify dogs and cats with simple scans on your mobile phone.

Dr. Jesse Joonho Lim, the founder of Petnow Inc. said, "The company is adding cat biometric recognition to the current app to support the most raised pet animals around the globe, and the app will help more pet households reunite with their beloved pets in case they go missing. The Petnow app can solve the problems of the existing pet identification methods such as microchips, tags, and collars that are prone to damage or loss, and it is beginning to enter the U.S. market upon the exhibition at CES 2023."

Dr. Ken Daehyun Pak, the co-founder of Petnow also quoted, "We have been hearing from customers domestically and internationally to add a cat identification function, and we are proud to announce the cat biometric recognition with 99% accuracy. We have cooperated with the largest Korean mobile carrier, SK Telecom, to introduce the dog version of 'Amber Alert' in South Korea, and we hope that we will provide more use cases for users."

With the release of the app to the U.S. and South Korea, Jesse wished to highlight the following:

About Petnow Inc.: Petnow Inc. is a pet identification development company based in Seoul, Korea. The company published the first paper about AI-driven identification of dogs using nose prints on IEEE Access in March 2021, followed by being selected as an Honoree of the Best of Innovation at CES 2022.

Petnow Inc. has been working with government departments and insurance companies in Korea to have its pet identification solution included in the national pet registry and used for introducing more affordable pet insurance plans to lower the burdens of vet bills. The identification app for dogs and cats has been showcasing at CES 2023, Venetian Expo, Level 1, Hall G, Booth #60633.

Pawaii rolls out the Pawaii Magic Bow, a set of multifunctional bowls