TAIPEI, Jan. 5, 2023 /PRNewswire/ -- Taipei Blockchain Week Bootcamp, held on Dec 15 - 17 2022 in Taipei, Taiwan, was a huge success, bringing together some of the biggest names in the blockchain industry. Speakers included representatives from Polygon, Avalanche, Nansen, Solana, and Alchemy, all of whom shared their insights and expertise with attendees. 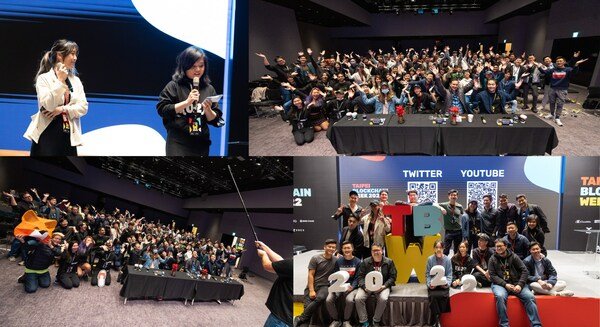 The workshops were designed to give attendees a deeper understanding of the technical aspects of blockchain technology and how it can be used to solve real-world problems with topics ranging from DeFi, Zero-Knowledge, and Security.

On the final day of the event, attendees had the opportunity to see the latest and greatest in blockchain innovation, with a demo day showcasing 16 talented new startups. These startups presented their ideas and projects to a panel of judges from Google Cloud, BNB Chain and Lead Capital, with the top three teams receiving awards and recognition for their efforts.

Overall, Taipei Blockchain Week Bootcamp was a fantastic opportunity for attendees to learn from industry experts, network with their peers, and get a start on the future of blockchain technology. With over 300 developers learning how to build with blockchain technology, it's safe to say Taiwan has a leg up on blockchain talent. Many developers have formed grassroots developer communities such as MoveDevs, and Taiwan University Blockchain Clubs. Many are looking forward to seeing what these startups and the rest of the blockchain community will accomplish in the future.

Bu Zhi DAO, a nonprofit DAO (decentralized autonomous organization), aims to highlight the best Web3 talent with a genuine interest in Taiwan and has spent the past year building relationships with those who support its mission to allow Taiwan to shine on the global Web3 stage.

EQBR Holdings declares it has solved the blockchain trilemma through its new blockchain engine, Equilibrium.