BANGKOK, Jan. 2, 2023 /PRNewswire/ -- The government and prominent private sector companies led by Central Pattana Plc, Thailand's top property developer, the Tourism Authority of Thailand and other partners organized 'Central World Bangkok Countdown 2023' at Central World, aka the Times Square of Asia and has been No. 1 New Year celebration landmark in Thailand for more than 22 years.

Highlights 'The World Artist of the Century – The Return of K-POP King 'RAIN' performed and led everyone to the New Year countdown along with unlimited celebration of top-award artists in Thailand together with spectacular 180˚ Musical Firework Extravaganza alongside 'Digital Firework Art' on the largest panOramix screen by world-class street artists; Rukkit x Pai Lectobacillous, enjoy the first Ratchaprasong City-Scene Synchronization from the synergy of businesses in the country's strongest commercial and tourism district, as the 'Must-Visit Countdown Destination in a Lifetime' that people from all over the world are eager to visit. It created such memorable moments of the year similar to other famous countdown landmarks around the world.

Pride of Thailand, the Central World countdown also displayed on the screen at Times Square in New York celebrating the countdown moments with people from all around the world. In addition, Central Pattana also emphasizing it reputation as countdown landmarks of the country in 'Thailand Countdown 2023' at seven branches of Central shopping centers nationwide.

Everyone enjoyed ALL-DAY CELEBRATION from morning to the countdown night, shopping, and entertainment with high-level safety measures. The city-scene spectacular fireworks continuously lit one after the other to catch the best view of Bangkok's skyscrapers as the 'World's Best Festive Destination'.

Central World is a must-visit destination for local and foreign shoppers, located in the middle of Bangkok at Ratchaprasong intersection with convenient travel on the BTS sky train. These countdown events helped to boost the country's economy and emphasized Central Pattana's brand commitment "Imagining Better Futures for All" as well as to promote Thailand as a memorable destination for tourists from all over the world. 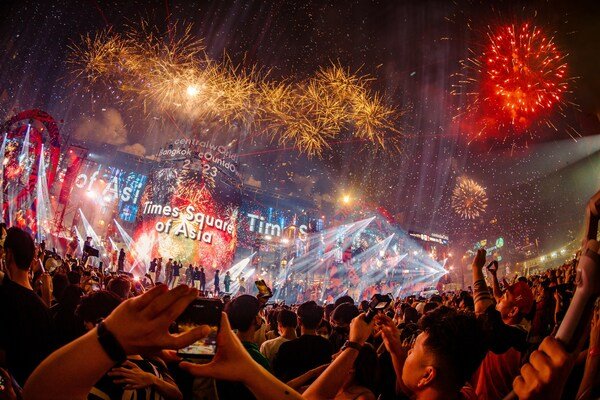 THE FIREWORKS MUSICAL SPECTACULAR, STAR ISLAND, RETURNS TO SINGAPORE TO USHER IN THE NEXT YEAR

The Westin Surabaya and Four Points Pakuwon Indah, Surabaya, are Hosting the Most Awaited Countdown Celebration to Welcome 2023

Going out with a bang: Travel for New Year's Eve skyrockets

Chula Ranked Top in Thailand and No. 5 in ASEAN by QS Sustainability 2023