TAIPEI, Dec. 27, 2022 /PRNewswire/ -- TaiwanPlus has released a film festival featuring a variety of classic martial arts films from renowned director King Hu. One of the films in the collection, "Dragon Inn", is said to have directly inspired Ang Lee, John Woo, Zhang Yimou, and Tsai Ming-liang to create some of their most successful films. The festival is the largest free collection of the acclaimed director's work. 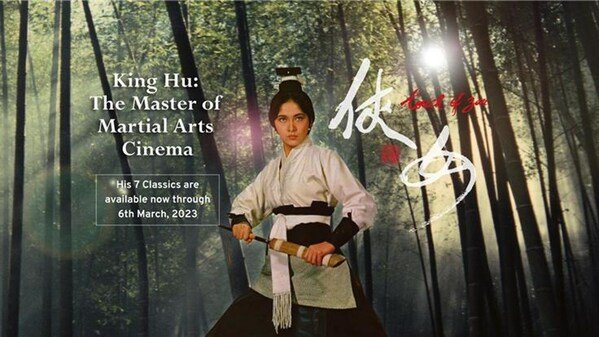 Martial arts film is a pillar of international cinema. From Ang Lee's "Crouching Tiger, Hidden Dragon" to Hou Hsiao-hsien's 2015 box office hit "Assassin," Taiwan has made significant contributions to the genre's popularity abroad. King Hu's work is the predecessor to each of these modern innovations. Ang Lee stated in an interview, "King Hu of course influenced me.... his mood, his use of space, aesthetic, look, how people go about with each other… so I need to thank King Hu."

King Hu is widely regarded as a master of the fantastical wuxia genre of martial arts film, and has a major cult following in Japan, Korea, and the U.S. "Sharing Taiwan's cinema is key to our mission of Bringing Taiwan to the World," says TaiwanPlus Acting CEO Michael Yu. "We look forward to giving English-speaking audiences a chance to experience Taiwan's culture through King Hu's iconic artistic vision."

In addition to "Dragon Inn," the film festival also includes "A Touch of Zen," winner of the Cannes Film Festival Technical Grand Prize. Through a dynamic collaboration with the Taiwan Film and Audiovisual Institiute, TaiwanPlus' current film offering also includes works from Ang Lee, Edward Yang, Hou Hsiao-hsien, and an exclusive documentary on Tsai Ming-liang. TaiwanPlus is set to release additional films to its growing collection throughout 2023.

TaiwanPlus is the premier global provider of English-language news and infotainment from Taiwan, one of Asia's most vibrant democracies. Our diverse team of journalists and producers is committed to delivering independent news and stories that inform, enlighten and inspire audiences worldwide.

With Taiwan at the nexus of global geopolitics and trade, TaiwanPlus offers a unique perspective on everything from cross-Strait relations to Taiwan's culture, including world-class programming covering food, travel and entertainment. Viewers can watch TaiwanPlus on its website, mobile app, 24/7 live-streaming YouTube channel, and other social media platforms, as it continues to expand access worldwide.