Welcome to Share and Write the Happiness of Shenyang

SHENYANG, China, Dec. 23, 2022 /PRNewswire/ -- On December 21, Happy Cities of China Forum 2022 co-hosted by Oriental Outlook magazine and Liaowang Institute both run by Xinhua News Agency was held in Hangzhou. The event released the list of China's Happiest City in 2022, and Shenyang was included on the list. 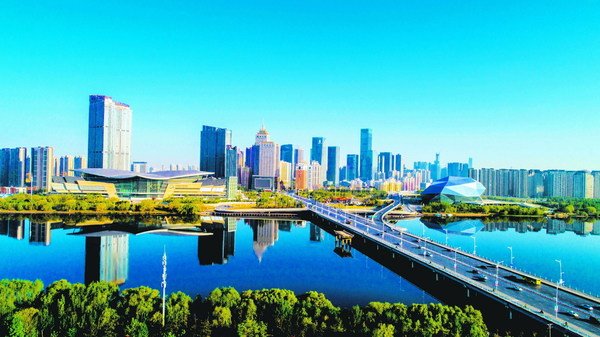 Chengdu, Hangzhou, Ningbo, Guangzhou, Nanjing, Qingdao, Changsha, Hefei and Xining are among the cities awarded the title of China's Happiest City in 2022.

As the capital of Liaoning Province, Shenyang is an important central city in Northeast China, an advanced equipment manufacturing base and a national historical and cultural city.

Shenyang is a cultural city with a time-honored history. With a history of more than 2,300 years, there are three world cultural heritage sites of "one palace and two tombs", there are modern and contemporary landmark historical buildings such as the Former Site of the Manchuria Provincial Committee of the Communist Party of China and Shenyang Tiexi, and there are more than 1,500 historical sites such as the Xinle Site as well as 10 national intangible cultural heritages such as the Northeast Drum, according to The Information Office of Shenyang Municipality.

These have formed a unique historical context of Shenyang with historical culture, red culture, industrial culture and national culture as the main line. After the founding of the People's Republic of China, Shenyang has marked a new milestone and created hundreds of top industries in China in machine tools, aircraft industry and other industrial fields, becoming the veritable "Eldest son of Nation".

Shenyang is a hub city extending in all directions. Located in the center of Northeast Asia economic circle and Bohai Sea economic circle, it is an important node of "Belt and Road" extending to Northeast Asia. It has a railway marshalling station that ranks the top in scale in China and the highest-grade expressway network of "one ring, two lines and seven directions". Its air routes can reach 25 international cities and 102 domestic cities as well as regions, in which the airport's capacity of Taoxian Airport has exceeded 20 million passengers, approved as one of the first batches of national logistics hubs for production and service during the "14th Five-Year Plan".

Shenyang is a livable city with beautiful mountains and rivers. In the east is Qipan Mountain, surrounding Xiu Lake. Shenyang Botanical Garden at the southern foot of Qipan Mountain, is a national 5A Scenic Area, known as "the World Expo in the forest". Wolong Lake in the north, the largest freshwater lake in Liaoning Province, is known as "Beihai of Shenyang" and "Pearl of Saibei", which is an important station on the corridor of bird migration in Northeast Asia. Southern Hunhe River crosses through the city, and there are natural and cultural landscapes such as Hunhe Forest Park, Olympic Park, Bird Island, Lang Lang Piano Square and Yunyang Pavilion, etc. At the same time, there are four national wetland parks including Puhe National Wetland Park and Shenyang Qixing Wetland Park. Lucid waters and lush mountains, ice and snow, being suitable for living, working and traveling constitute the solid foundation for Shenyang's development.

"China's Happiest City" is not only an honor, but also the most beautiful name card of Shenyang. Welcome to share and write the happiness of Shenyang. In order to pursue a better life, more than 9 million Shenyang people are forging ahead and working hard to build a vibrant, open and innovative, livable and happy homeland.

There are beautiful sceneries on both sides of the river in Shenyang.

Source: The Information Office of Shenyang Municipality
Tags : Welcome to Share and Write the Happiness of Shenyang