MONTREAL, Dec. 23, 2022 /PRNewswire/ -- Chinese dairy giant Yili Group released the first NFT-edition biodiversity report at the second session of the 15th Conference of the Parties (COP15) of the Convention on Biological Diversity, which was held in December 2022 in Montreal, Canada. 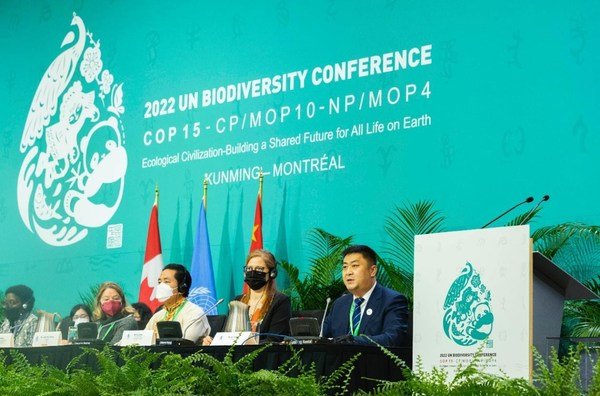 As the first Chinese company to sign the Convention on Biological Diversity's Business and Biodiversity Pledge, Yili has pioneered in biodiversity protection with concrete actions.

For example, the Group promoted an integrated agricultural system in Ar Horqin Banner, Inner Mongolia, raising the plant coverage rate from less than 10 percent in 2008 to more than 95 percent, and effectively converting what was once a desert into an oasis.

Under the efforts of Yili and partners, a series of campaign were launched to protect the natural environment and animals. A total of 4,050 mu (about 270 hectares) wetland was protected and thus 50,123 rare birds were observed. In rainforest in southwest China's Yunnan, they set up "cafeteria" for Asian elephants to preserve the species. Besides, they participated protection of coral reef in an Indonesian national park.

By leveraging cutting-edge technologies, Yili has also incorporated biodiversity protection with its products.

During the first session of the COP15 in 2021, Yili brand Satine launched a project on intellectual grassland. By monitoring grassland ecosystem and its biodiversity through smart terminal, Internet of Things (IoT) and Information Technology, Satine has provided big data support for biodiversity preservation.

Thanks to all these efforts made by the dairy giant, it was awarded the highest rating by Carbon Disclosure Project, a nonprofit providing environmental data. It also ranked top of the list in terms of environment, society and governance (ESG) in food industry, which was compiled by Chinese Academy Of Social Sciences in 2022.

COP15: An International Conference on Solutions to the Underlying Causes of Biodiversity Loss