NEW YORK, Dec. 20, 2022 /PRNewswire/ -- The Empire State Building (ESB), in partnership with iHeartMedia New York, announced today that it will premiere its annual holiday music-to-light spectacular set to music from the Backstreet Boys' new Christmas album, "A Very Backstreet Christmas." Once again, the light show will debut on Dec. 19 and run nightly through Dec. 25, timed to a 7 p.m. EST broadcast on iHeartRadio's Z100, 106.7 Lite FM, and 103.5 KTU. 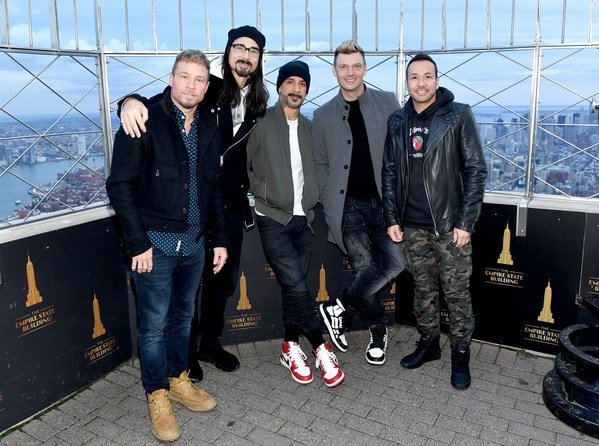 The Backstreet Boys visited the Empire State Building to flip the switch in a lighting ceremony and participated in a private Q&A with fans on the iconic building's 80th floor to kick-off the music to light show that is synced to "Christmas in New York" and "Last Christmas" from BSB's new holiday album.

"There's no place like New York City during the holidays and we are excited to once again partner with the Empire State Building on this annual music-to-light-show tradition," said Tom Poleman, chief programming officer for iHeartMedia. "This year, the Backstreet Boys gave us the perfect songs to help everyone get in the holiday spirit. Their very first Christmas album 'A Very Backstreet Christmas' is fantastic, and we can't wait to share their music synced to the holiday lights of the Empire State Building with New York and the world."

The annual holiday music-to-light show features thousands of LED lights atop the landmark tower, choreographed by world-renowned lighting designer Marc Brickman and his Tactical Manoeuvre team. Fans from outside the New York City area can watch the show live via the Earthcam on ESB's website, and a video of the entire show will be posted on the building's YouTube channel, with exclusive behind the scenes footage with the band at home, in the studio, and at the Empire State Building upon its Dec. 19 debut.

The Empire State Building is adorned with over-the-top holiday decorations throughout its Observatory Experience that was recently named #1 attraction in the U.S. by Tripadvisor travelers.

More information about the Empire State Building's tower lights can be found online. Past tower light shows can be viewed here.

Hi-res imagery and video from the Backstreet Boys visit can be found here.

About the Empire State Building

The Empire State Building, the "World's Most Famous Building," owned by Empire State Realty Trust, Inc. (ESRT: NYSE), soars 1,454 feet above Midtown Manhattan from base to antenna. The $165 million reimagination of the Empire State Building Observatory Experience creates an all-new experience with a dedicated guest entrance, an interactive museum with nine galleries, and a redesigned 102nd Floor Observatory with floor-to-ceiling windows. The journey to the world-famous 86th Floor Observatory, the only 360-degree, open-air observatory with views of New York and beyond, orients visitors for their entire New York City experience and covers everything from the building's iconic history to its current place in pop culture. Learn more at www.esbnyc.com. Declared "America's Favorite Building" by the American Institute of Architects, the world's most popular travel destination by Uber, the #1 Attraction in the United States in Tripadvisor's 2022 Travelers' Choice Best of the Best, and the #1 New York City attraction by Lonely Planet, it welcomes more than 4 million annual visitors from around the world.

Since 2011, the building has been fully powered by renewable wind electricity, and its many floors primarily house a diverse array of office tenants such as LinkedIn and Shutterstock, as well as retail options like STATE Grill and Bar, Tacombi, and Starbucks. For more information and Observatory Experience tickets visit esbnyc.com or follow the building's Facebook, Twitter, Instagram, Weibo, YouTube, or TikTok.

iHeartMedia, Inc. [Nasdaq: IHRT] is the leading audio media company in America, reaching over 90% of Americans every month. iHeart's broadcast radio assets alone have more consumer reach in the U.S. than any other media outlet; twice the reach of the next largest broadcast radio company; and over four times the ad-enabled reach of the largest digital only audio service. iHeart is the largest podcast publisher according to Podtrac, with more downloads than the next two podcast publishers combined and has the number one social footprint among audio players, with seven times more followers than the next audio media brand, and the only fully integrated audio ad tech solution across broadcast, streaming and podcasts. The company continues to leverage its strong audience connection and unparalleled consumer reach to build new platforms, products and services. Visit iHeartMedia.com for more company information.

The 2022 Empire State Building Run-Up to Return on Oct. 6, 2022 Presented by Turkish Airlines and Powered by the Challenged Athletes Foundation