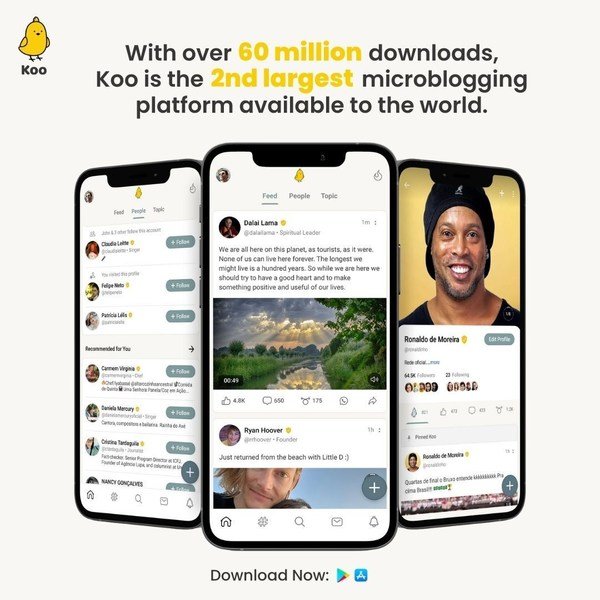 Koo recently achieved 60 million downloads worldwide. The platform is all set to increase its footprint globally with a very strong proposition that will include a feature that enables users to migrate from Twitter to Koo and a free self-verification tool that can verify their humanness within seconds. The company has made it easier than ever to migrate from Twitter with the ability to import tweets and follower lists from Twitter to a Koo account, eliminating the need to start from ground zero.

Koo's proprietary feature called Multi-Language Kooing allows users to post simultaneously in several world languages emulating Koo's goal to drive digital inclusion. Users can view their posts and also use the translation feature to read comments / posts in a language of their choice. This also helps creators expand their reach beyond their existing languages. For instance, a French user will now be able to speak to a Brazilian and a Brazilian will be able to interact with a German. This doesn't happen anywhere on the internet.

Mayank Bidawatka, Co-founder, Koo, said, "Our mission is to unite the world despite its language barriers, and are the most inclusive social media platform in the world. Users looking for Twitter alternatives will feel familiar when they use Koo. We have retained the core functionality that they are used to with micro-blogs while adding many new features that they will love. Koo is the future of micro-blogging."

Users can also enjoy a 500-character limit, edit post functionality, the ability to upload up to 10 profile photos, images and videos as large as 512MB. Koo is available for download on the Apple App Store and Google Play Store. Visit www.kooapp.com to learn more or create a profile and start kooing.

Doxy.me extends telemedicine's reach to 88% of the world's population