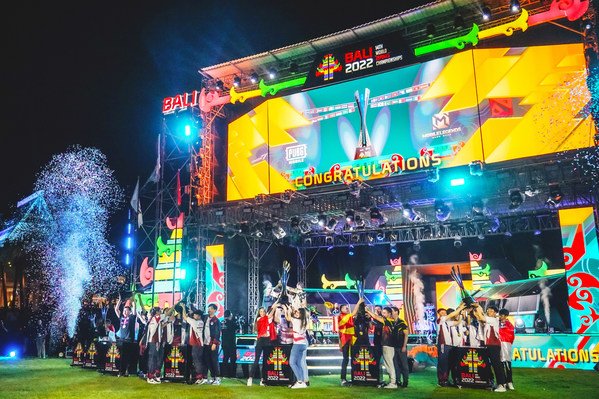 Over 600 athletes representing 105 countries competed at the WE Championships, the most nationalities ever represented in an esports tournament. The record $500,000 prize pool was split among the winners of six games: CS:GO, Dota 2, Mobile Legends: Bang Bang, eFootball 2023, Tekken 7 and PUBG Mobile. Host nation Indonesia won an unprecedented three of the seven games and was crowned the World Esports Champion.

IESF President Vlad Marinescu presented Indonesia with the WE Championships trophy and said: "Congratulations to Indonesia for becoming the World Esports Champion and to all of our medalists. We are extremely grateful to our hospitable host city Bali for sharing IESF's values of respect, friendship and unity and supporting our mission to unite, support, and empower the international esports ecosystem. Esports' growth is unparalleled; together, we have broken barriers and made history!"

Indonesia's passion for esports energized every competition, with enthusiastic fans cheering on all of the action. The nearly 500 hours of fierce competition surpassed 10 million views, reached more than 3 million views on TikTok and 185.4 million impressions across all social media platforms. IESF also took a significant step towards creating more opportunities for women in esports and crowned Poland the first-ever women's CS:GO tournament champion during the WE Championships.

The 2022 edition of the WE Championships marked the largest and most geographically diverse installment of the event in its 14-year history. During the Closing Ceremony, Bali officially handed over hosting rights to Iași, Romania, for the 2023 WE Championships Finals. The event is set to feature over 800 athletes from 130 nations and engage a new generation of esports fans to continue the historic growth of the World Esports Family.

About IESF
IESF is the uniting body for World Esports. Founded in 2008 by nine-member nations, IESF is composed of 130 Member Federations across six continents. IESF brings together all esports stakeholders to achieve a united ecosystem for the development of sustainable and responsible gaming worldwide. The IESF World Esports Championships is the biggest multi-sport spectacle of esports in the world. IESF also organizes the annual World Esports Summit in order to support the highest standard of esports governance.