TAIPEI, Dec. 16, 2022 /PRNewswire/ -- Memory manufacturer Macronix International Co. Ltd has received the Best Memory Product of the Year award at EE Awards Asia 2022. This is the second consecutive year that Macronix's memory devices have been recognized at Asia's leading awards program honors the best companies, solutions, and innovations in the semiconductor industry. Macronix received the award for its ultra-low power (ULP) 1.2V serial NOR flash memory. 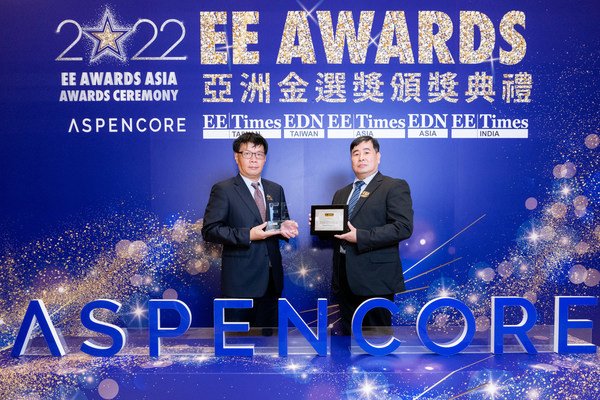 Organized by AspenCore—the publisher of EE Times, EE Times Asia, EE Times India, and EDN Asia — EE Awards Asia celebrates the innovation, creativity, and contributions of Asia's engineering community that have made a difference in the way we work, live, and communicate, and play over the past year. This year, EE Awards Asia attracted more than 400 applications from 137 companies around the world, competing for 22 awards. Apart from its back-to-back Best Memory Product awards, Macronix this year also received a Taiwan Enterprise Award.

Power consumption continues to be a major concern throughout the semiconductor industry, as chips represent an ever-increasing portion of products addressing fast-growing and rapidly evolving markets such as automotive electronics, networking, data centers, artificial intelligence, wearable devices, and the Internet of Things (IoT).

Higher-power flash memory contributes to a systems' higher overall system demand for energy. This adds up over time to be energy that could have been conserved through lower-power flash memory, or better yet, through ULP solutions such as the MX25S, according to Martin Lin, Director, Segment Marketing Division/Marketing Center at Macronix.

"Across the semiconductor industry, which is expecting a 23 percent compounded annual growth rate for ULP microcontrollers, chip makers are moving steadily toward more power-efficient solutions," Lin said. " If you look at medical applications like electrocardiograms and glucose monitors, for example, they use devices that both need to be minimal in size and are heavily reliant on maximizing battery life — essential to ensuring patients' health and wellbeing. So, the smaller the memory size and the lower the power consumption, the longer the devices' batteries will last, thus requiring less-frequent replacements."

The Macronix MX25S series is a family of ULP serial NOR flash memory devices with power ratings of between 1.14V and 1.6V, which significantly extend the battery life of products and systems whose applications require low voltage operation and current consumption.

What makes the MX25S unique is that it was designed to deliver optimal power management and performance to power-constrained applications — all without sacrificing speed and essential features. It has a mode-selection feature that enables systems using it to switch between ULP and high-performance modes dynamically, depending on needs, to optimize system operation.

"The MX25S stands out also because it represents the industry's first family of 120MHz 1.2V NOR flash memories to reach mass production, making Macronix the sole high-volume source of such ULP flash memory," said Lin.

Such are the features that garnered Macronix's memory product the most votes across Asia's electronics engineering community and making it the recipient once again of the Best Memory Product Award at EE Awards Asia.

"For more than a half-century, EE Times, its regional editions, and its sister publications have been among the most-respected technology news sources for the worldwide engineering community," Lin stated. "Winning this award from so prestigious a publishing organization is a testament both to our valued customers around the world who have put their faith in Macronix and to the vision and dedication of our employees committed to bringing market-defining non-volatile memory to those customers."

"At Macronix, we're constantly improving our flash-memory technology, and 2023 will be no exception," Lin said.

He added that apart from making devices more efficient, as with the MX25S family, Macronix is developing a flash memory that can improve system performance, notably FortiX, which builds processing power directly into flash memory to minimize the need for data to travel to and from a CPU, thus reducing processing time and energy demands.