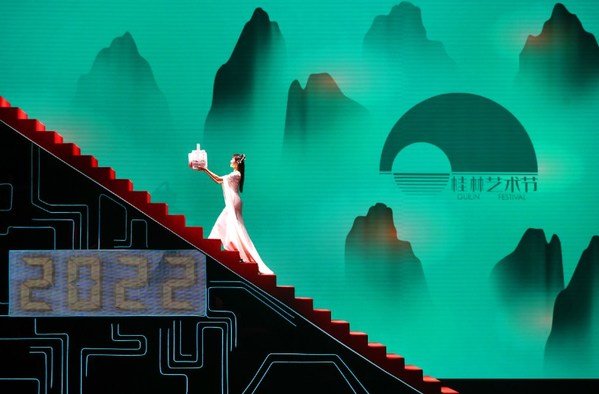 The opening ceremony of the 2022 Guilin Art Festival took place on Sunday at the Guangxi Provincial Art Museum in Guilin, Guangxi Zhuang autonomous region. [Photo by Zhou Jun for chinadaily.com.cn]

Guilin, a city of Guangxi Zhuang autonomous region, is known for its splendid natural beauty, which makes it one of the most popular tourist destinations in the country.

Its fame is reflected in a popular Chinese saying, proclaiming "Guilin's landscape is the best under heaven".

The city has now become a new destination for theater lovers with the inaugural Guilin Festival running from Dec 10 to 18.

It will stage 29 theatrical productions, indoor and outdoor, at 10 locations in Guilin. A total of 128 shows will be presented, as well as street performances.

"Guilin Festival will be held as an annual event. We will invite theatrical companies from around the world to perform in the festival. It will become a platform for global artists as well as serving as an opportunity to train young theater talent," says Yang Yanyan, head of the publicity department of Guilin, one of the organizers of the Guilin Festival.

She adds that, besides theatrical productions, the festival will also feature music and dance performances.

Two Capitals, Fifteen Days, a play based on the popular novel with the same title by Chinese award-winning writer Ma Boyong, opened the festival with two performances staged at Guilin Grand Theater on Dec 10 and 11. Against the backdrop of the Ming Dynasty (1368-1644), the play follows a prince, Zhu Zhanji, who embarks on a crazy 15-day journey, from Nanjing, Jiangsu province, to Beijing along the Grand Canal, in a bid to save himself and the dynasty.

The play, directed by Zhao Miao, who is known for his pioneering theatrical productions, especially physical theater works, features 226 characters. And, as well as the thrilling and romantic plot, audiences will also be able to enjoy a vivid scroll featuring scenes along the Grand Canal during the Ming Dynasty.

Over 10 types of folk art are featured in the play, such as pingtan, a kind of storytelling and ballad singing from Suzhou, and shadow play.

Beijing-based Central Academy of Drama is another co-organizer of the festival.

According to Hao Rong, president of the Central Academy of Drama, Guilin has a long history with theater and the school also has a deep connection with the city.

Ouyang Yuqian, renowned Chinese playwright and director, who was the first president of the Central Academy of Drama, lived and worked in Guilin. In 1940, he initiated Guangxi Provincial Art Center, one of the first professional theaters in China for staging plays, and worked as its first president. He promoted and renovated Guiju Opera, a traditional Chinese opera form that originated in Guilin during the Ming Dynasty, and wrote Guiju Opera plays.

In 1944, Ouyang, along with Tian Han, his longtime friend and dramatist, launched the Exhibition of Dramatic Arts, which, in nearly 100 days, gathered over 30 theater companies and over 1,000 theater artists, staging over 170 plays. The event was a phenomenon and was very well-received by audiences, especially in the way they encouraged people during the War of Resistance Against Japanese Aggression (1931-45).

"The experience of going to live theater is inspiring and exciting. We want to build Guilin Festival into an event for people to communicate, to enjoy shows as well as for those who hope to start their careers in theater," says Hao.

Young Chinese actor and director Hu Hanchi staged one of his directorial works at the festival, a Kunqu Opera production, Six Records of a Floating Life, on Dec 10 and 11 at a pavilion on a small island in Ronghu Lake, a well-known Guilin scenic spot.

Adapted from the classic book with the same title by Shen Fu, a writer and painter from the Qing Dynasty (1644-1911), the play, which premiered in 2018, has garnered a large fan base with its innovative presentation, which sets performers against the backdrop of Canglang Pavilion in Suzhou, a place with a history dating back to the Song Dynasty (960-1279).

In 2020, when the production was staged at the Daliangshan International Theater Festival in Xichang, Sichuan province, Hu adapted the original Kunqu Opera production into a new version, since it was to be staged outdoors and closer to the audience.

"The shows staged in Guilin were the version that I made for the Daliangshan International Theater Festival. The pavilion on the small island is very beautiful with many trees and flowers. Audiences enjoyed both the performances and the great view," says Hu, adding that it was the first time to stage his work in Guilin.

Hu was born and raised in Hangzhou, Zhejiang province, and was introduced to Kunqu Opera by his parents, both of whom were performers at the Zhejiang Peking Opera and Kunqu Opera Art Theater.

Besides his directorial work, the 30-year-old will also be one of the actors of a physical theater production, titled Aquatique, which is directed by Zhao Miao and will be staged at Guilin Xiangshan Scenic Area on Dec 13 and 14.

The story was adapted from Qing Dynasty writer Pu Songling's short story collection, Strange Tales From a Chinese Studio, which is about a water ghost looking for a scapegoat. The play features elements of Nuo Opera, a type of traditional Chinese opera originating in the 16th century as a form of totem worship, and features eight male actors who perform in Nuo Opera masks made of wood.

Because Guilin is not only home to famous landscapes, but also a diversified population of ethnic groups — 28 in total, including Zhuang, Dong, Miao, Yao and Yi — local artists will also be featured prominently at the festival.

Theatrical Guilin, which features Guiju Opera artists from Guilin, will be staged on Dec 15 and 16. The show is presented by the Guilin Intangible Cultural Heritage Conservation and Inheritance Center, and directed by Li Zhuoqun, who is known for her creative approach of bringing Peking Opera into small theaters, particularly popular among younger audiences. It features three classic Guiju Opera pieces, including Romance of the Jade Bracelet. The show, which premiered in early 2018, has been staged nearly 200 times in the city.

Born in Nanning, capital city of Guangxi, and later moving to Guilin, Pai, 85, relocated to Taiwan province in 1952.

Before adapting it into a Guiju Opera, Huang Weilin, who is the scriptwriter of the production, sent the script to Pai, who replied with his approval.

"The production is loyal to the original novel and expresses nostalgia for one's hometown through rice noodles, which is one of the most popular and famous foods in Guilin," says director Hu Xiaoping.