"My China Story of the Greater Bay Area" 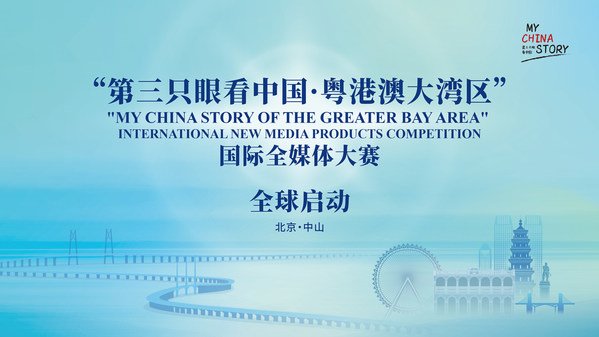 In his speech at the launch ceremony, Gao Anming, vice president and editor-in-chief of CICG, it is a new measure to make new ground in pursuing opening up on all fronts in the new era, and a new practice of promoting the development of "One Country, Two Systems". Focusing on the development of the Greater Bay Area, the competition hopes to gather excellent media works by teams of Chinese and foreign creators from Guangdong, Hong Kong, Macao, and other parts of China as well as all over the world. It also converges on the wisdom and experience of domestic and international academics on the development of China's openness and international cooperation, thereby promoting the globalized, differentiated and regionalized expression of the Greater Bay Area story.

Lin Ruixi, member of Standing Committee and director of Publicity Department of the CPC Zhongshan Municipal Committee, said that this competition focuses on the Greater Bay Area, in which Zhongshan is an important node city. When the important transportation project Shenzhen-Zhongshan Link is completed in 2024, the advantages of Zhongshan's central location in the Greater Bay Area will become even more apparent. We look forward to inviting more partners, Chinese and foreign creators to Zhongshan, to experience the profound culture and endless vitality of the world-class Greater Bay Area, to explore the abundant materials for global presentation and to feel the broad prospects of the Greater Bay Area.

The competition is jointly organized by the Information Office of Zhongshan Municipal People's Government, the Internet Information Office of Zhongshan, GDToday, Xufang International Media of CICG, and Sharp Sence Media, under the support of more than 10 professional organizations, such as the Academy for International Communication of Chinese Culture of Beijing Normal University, the Academy of Contemporary China and World Studies, Hong Kong Cable Television Limited, The Culture & Sports Development Office of Macau University of Science and Technology, Oceans Culture Communications Ltd., Toutiao, Xigua Video, and Sina Weibo.