KUALA LUMPUR, Malaysia, Nov. 31, 2022 /PRNewswire/ -- On the eve of the final Group B game between England and Wales, Melbourne Capital Group, in association with the Kuala Lumpur Rangers Supporters Club and TEG Media, were thrilled to bring former England legend Paul "Gazza" Gascoigne to Bar Roca in Kuala Lumpur. The intimate meet and greet was attended by almost 50 fans. 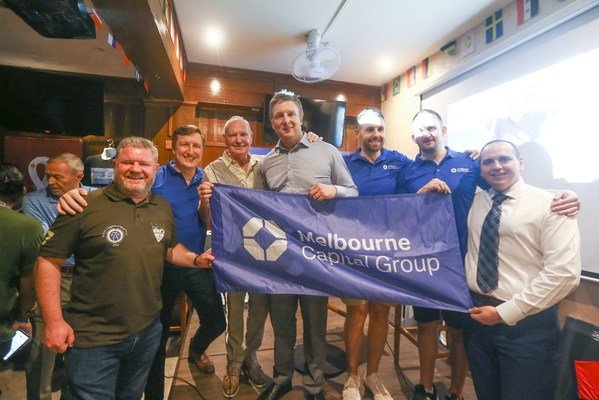 It was the first time that Gazza (as he is more commonly known) has travelled to Malaysia. Wholeheartedly embracing adventure in life, he has travelled extensively around the world, both during his career as a player, a coach, and as an ambassador for the English Football Association.

When planning the event, the opportunity to give back to the community became clear and a raffle of signed memorabilia was organised. "We are asking the community to join us in giving as we approach the Christmas season. Stepping Stones Living Centre provides safety, care, and accommodation for underprivileged children and senior citizens," said Christopher Crowe, Director at Melbourne Capital Group. Proceeds of RM 10,200 from the event will be donated to the Stepping Stones orphanage in time for Christmas.

"We believe in building stronger and more inclusive communities. That is why community engagement is such an important pillar of our social responsibility as an organisation," said Mark Owens, Head of Private Wealth at Melbourne Capital Group.

Everyone has a different perspective on what constitutes a legend in football, and when the term legend is used it is often met with skepticism. Gazza is one of the players of his generation who truly transcended their sport to become a legend, alongside names such as Maradona, Ronaldo, Messi, and Pele. Accordingly, there was a great deal of community engagement.

During the evening hosted by Bill Cooper, Commercial Director of TEG Media, and Bob Holmes, seasoned Football Pundit, Gazza shared the highlights of an illustrious life with many ups and downs. Delivered with superb energy and wit he recounted many of his football stories over the years, touching on experiences with Terry Venables, Alex Ferguson, Sir Bobby Robson, and the late Walter Smith to name just a few.

Fans in attendance were supporters of Newcastle United, Everton, Tottenham, Rangers, Middlesborough, Boston United – and even a former player from Kettering Town named Sam Postlewaite. Sam played for Kettering Town when Gazza was their manager, in the later stage of his career. Sam said "Gazza used to let the young players drive his Ferrari in the car park at training". This epitomizes Gazza's generous and giving nature.

Melbourne Capital Group works with clients from all walks of life, from everyday professionals to professional athletes.

"Our mission is to deliver an outstanding, rewarding, and transparent standard of wealth management which meets the specific needs and goals of our clients, and to use our knowledge and experience to take those clients to the next level of financial security and comfort." said Reuben van Dijk, Director at Melbourne Capital Group.

Everyone has a story, we start by listening to yours.

Melbourne Capital Group are pleased to announce that Jamie Bubb-Sacklyn is to join the Private Wealth team in Kuala Lumpur in August 2022.

100PLUS CELEBRATES WORLD HYDRATION DAY BY HYDRATING OVER 100,000 MALAYSIANS ACROSS PENINSULAR MALAYSIA