GUANGZHOU, China, Nov. 30, 2022 /PRNewswire/ -- Organized by the Office of the National Brands Project of Xinhua News Agency, co-organized by Infinitus with the support of the China Association of Chinese Medicine (CACM), the 2022 Responsibilities for Health Forum (RHF) was held online during the 2022 Boao Forum for Chinese Entrepreneurs on November 26, 2022. The event was designed to publicize China's superior wellness culture while bringing the world up to date on the latest innovative developments taking place in the field of traditional Chinese medicine (TCM) and promoting its cultural inheritance. 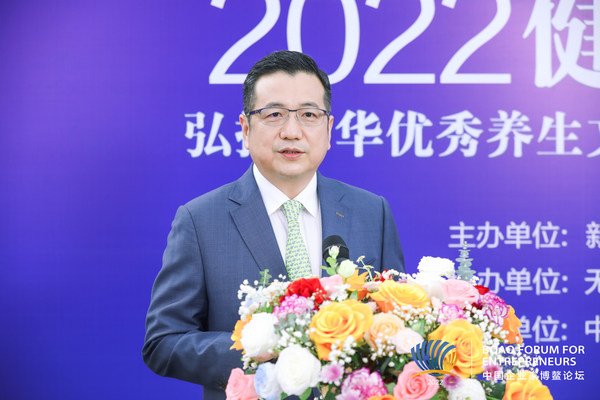 "The combined application of TCM and Western medicine has become the highlight of China's solutions for containing Covid-19. Recognized by the Central Committee of the Chinese Communist Party and the State Council and receiving the overall support of the general public, the approach has reinforced our belief in promoting the integrity and innovation of TCM," said the CAE researcher, Mr. Zhang, when talking about the TCM's more than outstanding contribution to the country's fight against Covid-19. "Innovation, which serves as the foundation for modernizing the TCM system, calls for joint efforts across multiple disciplines to achieve meaningful developments in the area of TCM. Most notably, entrepreneurs are well-positioned to effectively facilitate the modernization of the system by integrating these resources."

"This year marks the 30th anniversary of the founding of Infinitus. Over the past 30 years, we have accumulated extensive experience in promoting China's wellness culture through an in-depth commitment to the health and wellness sector," stated the Infinitus Global CEO, Mr. Yu. "With strong confidence in traditional Chinese wellness culture, we have been drawing wisdom from the culture and publicizing it by leveraging the integrity and innovation of modern technologies. Based on our 30 years of experience, we have also recognized the importance of educating and communicating with the general public about TCM."

Released during the 2022 RHF, the National TCM Health Index Report 2022 is the sixth edition of the report since its first edition in 2015. The report is also a brand project jointly put together by CACM and Infinitus. "By evaluating the health status of the population as a whole as well as the factors that influence the status from the perspective of TCM, the report is designed to inform the Chinese government's health-related decisions while providing health and wellness guidance for the general public as well as a basis for the healthy and orderly development of the TCM market," indicated the CACM vice secretary general, Mr. Chen, at RHF.

In addition, the CAE researcher, Mr. Wu, and the SFHI professor, Mr. Peng, witnessed the establishment of the Infinitus Polysaccharide and Immunity Research Laboratory at the inauguration ceremony of the lab held during the forum.

"The herbal ingredients of Infinitus' health foods have demonstrated their immunomodulatory and anti-aging effects in several animal experiments," said Mr. Peng as he shared the latest results of SFHI's and Infinitus' joint research program.

During the keynote speech entitled "Integrity and Innovation, Infinitus for Health", the Infinitus (China) VP, Mr. Hu, elaborated on Infinitus' core advantages in addressing the most pressing wellness-related issues of the moment by making high-quality herbal health products available to the general public.

The 2022 RHF ended with the announcement of a health responsibility initiative in which all participating specialists, researchers and industry leaders will participate, aimed at publicizing China's superior wellness culture in tandem with promoting the cultural heritage and the latest innovations in TCM.

In the future, Infinitus plans to continue in-depth exchanges and discussions with all experts across a wide range of disciplines as well as with the general public. The goal of the initiative with be to achieve a win-win situation for all stakeholders by building consensus on health-related topics as well as to comprehensively enhance health and wellness for all while contributing to economic and social development.