BEIJING, Nov. 26, 2022 /PRNewswire/ -- On November 3rd, on the sixth day of the exhibition of "Pursuing Dreams with a Pure Heart - Han Yuchen Oil on Canvas Collection" at the National Art Museum of China, Fan Di'an, Chairman of the China Artists Association and President of the Central Academy of Fine Arts, and Wang Xiaolin, Deputy Secretary of the Party Committee of the Central Academy of Fine Arts comes to visit. 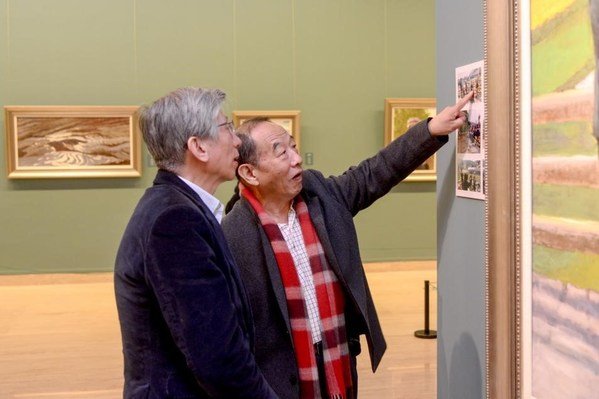 Painter Han Yuchen and Fan Di'an have been good friends for many years. After a warm greeting, Han Yuchen guides Fan Di'an into the third exhibition hall of the art museum to see each of his works.

"Qingzhang Riverside" was created in April 1973 and is also the first piece in this exhibition. Han Yuchen said that this is due to the fact that in early 1972, he was instructed by two teachers, Li Hua and Su Gaoli from the Central Academy of Fine Arts, and learned the process of oil painting and sketching. Fan Di'an observed the painting in great detail and praised Han Yuchen for being able to draw such a marvelous painting at the age of 19, which is really rare.

Afterwards, Fan Di'an praised him for his accurate depictions of the works of farmers, such as "Taihang Old Farmer", "Xida of She Village", "Farmers in the Field", "The Smoker" painted by Han Yuchen in 1975 and 1981. The 1986, painting "Zhangjiajie Scenery" was also highly praised for its richness in color.

In recent years, Han Yuchen has traveled all over China and painted a large number of works of ethnic minorities. In the fifth exhibition hall, Fan observed the Tibetan, Shui, Yao, Buyi, Dong, and Russian minorities paintings and praised Han Yuchen for his accurate grasp of the characteristics of different ethnic groups and his portrayal of the spiritual outlook of these different groups. Each work is vivid and expressive. When he learned that "Gannan Lengben Daoji" and "Light and Shadow" were collected by the National Art Museum of China, Fan took a very close look at these two works. They could be said to be the representative works of Han Yuchen's oil painting and sketching in this exhibition.

Fan Di'an is not only a famous art theorist, but also an oil painter, specializing in large-scale landscape works. During the visit, he showed great interest in several 135cm×230cm paintings of Han Yuchen, and observed them in great detail. When Han Yuchen explained his creative process of painting to Fan Di'an, Fan Di'an encouraged Han Yuchen to continue his work, to explore, make breakthroughs, and strive to draw more masterpieces.

Before leaving, Fan Di'an said affectionately: "Yuchen, your persistence in painting for 50 years is invaluable. I sincerely hope that you will continue to persevere and use your new creations to sing praise for the new era."

"Walking the Crack" Metaphors of Contemporary Life, Odysseys in Linearity