HONG KONG, Nov. 24, 2022 /PRNewswire/ -- Today, The Nature Conservancy Hong Kong (TNC) announced that its pilot Shellfish Habitat Restoration Project in Tolo Harbour has shown progress. The first reef survey conducted two months after the deployment of an artificial reef onto the seabed proves that abundant and diverse life was found settling on the reef, and there are signs showing that it is also attracting commercial crab and fish species, including big snappers. 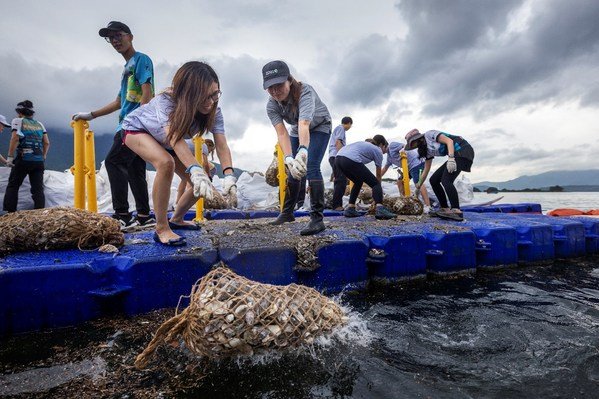 In partnership with local fish farmer Alex Lam, TNC deployed the artificial reef in June 2022 using recycled oyster shells, aquacultural debris and limestones near a licensed fish raft in Yung Shue Au Fish Culture Zones (FCZ). The oyster shells were collected from restaurants and local oyster farmers participating in TNC's "Save Our Shells" initiative, which were treated in the sun for disinfection and bagged in biodegradable mesh bags. The aquacultural debris used in constructing the second layer of the artificial reef were weathered concrete poles used by traditional oyster farmers in Deep Bay. These are encrusted with oyster shells and collected by TNC volunteers on the Pak Nai mudflats over the past two years.

An illustration of the artificial reef deployed in the Tolo Harbour pilot, creating a habitat for fishes and other marine life

Shellfish reefs are the most endangered marine habitat on Earth with an estimated 85% global loss. TNC runs the Tolo Harbour pilot under its Hong Kong Oyster Restoration program to understand and quantify shellfish reefs' critical ecological benefits to coastal protection and marine ecosystems.

Several other pilots had been launched in Lau Fau Shan, North Lantau and Yung Shue O aquaculture communities. TNC has been monitoring the reef's growth and its impact on biodiversity on an ongoing basis. The data collected are then further utilised in developing future restoration methods and scale-up.

Supported by The Agriculture, Fisheries and Conservation Department (AFCD), the Tolo Harbour pilot aims to enhance the development of sustainable aquaculture in the FCZ, whose marine environment had suffered due to overharvesting and pollution

To put it into perspective, a Hong Kong single adult oyster can filter and clean up to 30 litres of milky water an hour, playing an essential role in clearing the water around fish farms which are polluted due to the excess nutrients generated through livestock waste or uneaten food.

Further assessments will be conducted to evaluate whether the artificial reef is successful in mitigating nutrient loading from fish farms and increasing biodiversity, especially the fish species utilizing the reef.

Marine Thomas, Senior Conservation Program Manager at The Nature Conservancy in Hong Kong said, "The pilot can be successful in informing sustainable mariculture development as well as restoration strategies in Tolo Harbour, and will be used as a benchmark to inform the scale of restoration that is needed in the future."

TNC will continue to assess the site and monitor the recruitment of reef-building bivalves and other marine life, fish species that utilize the reef, and the nutrient mitigation potential of shellfish reefs in Tolo Harbour over the next 1.5 years.

About The Nature Conservancy

The Nature Conservancy is a global conservation organization dedicated to conserving the lands and waters on which all life depends. Guided by science, we create innovative, on-the-ground solutions to our world's toughest challenges so that nature and people can thrive together. We are tackling climate change, conserving lands, waters and oceans at unprecedented scale, providing food and water sustainably and helping make cities more sustainable. Working in 76 countries and territories, we use a collaborative approach that engages local communities, governments, the private sector, and other partners. TNC was awarded the Lui Che Woo Prize for Sustainability in 2019. To know more about TNC's work in Asia Pacific, please visit: www.tnc.org.hk.