TAIPEI, Nov. 23, 2022 /PRNewswire/ -- Hot on the heels of the U.S. midterm elections, TaiwanPlus will host a livestreaming program covering Taiwan's local elections 2022, which promise hard-fought battles across its 22 cities and counties, including its capital, Taipei. TaiwanPlus, Taiwan's first English-language global streaming media provider, will guide viewers through key ballot issues, some of which touch on wider developments, including cross-Strait tensions and US-China relations. 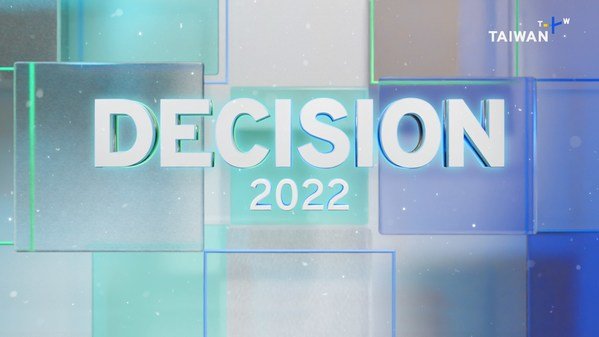 The two-hour "Decision 2022" program – to be broadcast on Saturday, November 26, 2022, starting at 6:30 p.m., Taipei time (GMT +8) – will cover election night events as they unfold, providing lively discussions and analysis on the key people, personalities and issues. The vote will include a referendum on lowering the voting age from 20 to 18, an issue expected to rally younger voter turnout. These elections will be closely watched as the major parties will be jostling for regional gains prior to the 2024 presidential election.

Michael Yu, Acting CEO of TaiwanPlus, said: "TaiwanPlus is excited to share Taiwan's democratic process with viewers around the world via its livestreaming event, 'Decision 2022'. If the recent races in the United States, Brazil and Malaysia were any indication, the outcomes of Taiwan's local elections will impact not only its own residents, but also global citizens with a keen eye on Asia's political shifts."

The "Decision 2022" livestreaming program will also feature a panel of special guests, including former Director of the American Institute in Taiwan (AIT), William A. Stanton; military strategist and former Deputy Minister of Taiwan's Mainland Affairs Council, Alexander Huang; and President of The Prospect Foundation, I-Ching Lai.

TaiwanPlus is the premier global provider of English-language news and infotainment from Taiwan, one of Asia's most vibrant democracies. Our diverse team of journalists and producers is committed to delivering independent news and stories that inform, enlighten and inspire audiences worldwide.

With Taiwan at the nexus of global geopolitics and trade, TaiwanPlus offers a unique perspective on everything from cross-Strait relations to Taiwan's culture, including world-class programming covering food, travel and entertainment. Viewers can watch TaiwanPlus on its website, mobile app, 24/7 live-streaming YouTube channel, and other social media platforms, as it continues to expand access worldwide.

Greenland, together with Top Universities and Concordium Blockchain, is investigating the possibilities of a blockchain-based election system in the country

"ECCEASIA - THE EXCELLENCE OF EUROPEAN OLIVE GROWING IN ASIA": ITS JOURNEY TO TAIWAN CONTINUES

"Walking the Crack" Metaphors of Contemporary Life, Odysseys in Linearity