HO CHI MINH CITY, Vietnam, Nov. 22, 2022 /PRNewswire/ -- The KOSMIK Live Concert, held on November 12th evening, has raised the bar in Vietnam's music industry. The concert, which celebrated the 11th anniversary of SpaceSpeakers, entertained around 5,000 spectators with memorable stage experiences. Eleven SpaceSpeakers artists and guest artists performed over fifty songs divided into three chapters, with each one representing the flow of time as Street (The Past), Space (The Present), and KOSMIK (The Future). 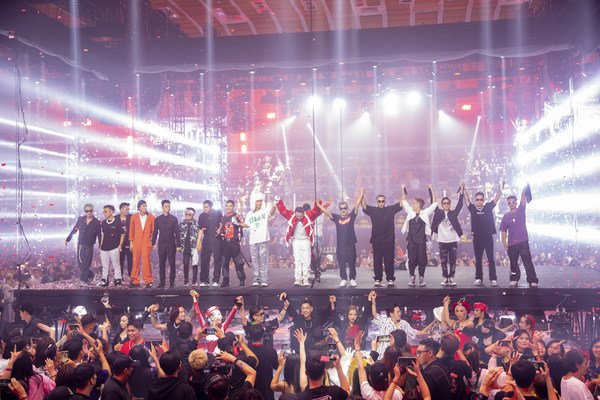 In this musical party enlivened by giant LED screens and dancing lights, each SpaceSpeakers artist shows their signature personality. The audience witnessed Kimmese go free flow while performing, and Cuong Seven served a flexible dancing style over dynamic songs. JustaTee again proved his talent deserves to be called "King of Vietnam's Rn'B," and Rhymastic showed his accomplished skills in both singing and rapping. In contrast to Binz, who exuded a "bad boy" vibe through his rapping, SOOBIN portrays a mature man who could sing beautifully and play various musical instruments like piano and drums skillfully. Two live sets played by DJ TINLE and Triple D lit up the room. Showcasing his academic music talent, SlimV is producing and mastering numerous songs at KOSMIK Live Concert.

A series of hit songs by SpaceSpeakers artists such as Huong Ngoc Lan, Beautiful Girls, Crying Over You, Yeu 5, Nen Va Hoa, Bang Khuang, Daydreams, The Playah, BigCityBoi, They Said, Gene, and many more, has resounded on stage. As fans requested, the songs were re-made to be more innovative and trendier, showing that SpaceSpeakers artists' work lasted over time.

Spectators could also be immersed in the concert as it has no stage area that usually separates the artist and their audiences. This idea stemmed from director Viet Tu wanting to eliminate the physical stage, so the GA zone became a space where artists surprised the audience by appearing in random corners. With an empty 360-degree space, the artists could interact with audiences in all directions. Lighting systems were also crucial in making this kind of stage unprecedented in Vietnam. Moreover, a couple of giant LED screens were set at two poles of the gymnasium, ensuring that nowhere could miss the flow.

Besides wonderful music, at KOSMIK Live Concert, each performance was well-prepared with a specially choreographed dance actioned by up to hundreds of dancers. The show consisted of many dance genres, varying from break dance (derived from Hip-hop) to "sexy" dance. All these factors assisted in the success of the show.

The KOSMIK Live Concert 2022 confirms SpaceSpeakers' preeminent position in the Vietnamese music industry. Receiving a significant number of good reviews, KOSMIK Live Concert is likely to set a new standard in the performing arts industry in Vietnam. The heat lingered for many days after the concert, covering the mass media and social networks.