HONG KONG, Nov. 21, 2022 /PRNewswire/ -- "When you want to stand out in a crowd, in a sea of very similar-looking earbuds, this is definitely going to achieve that. I just have not really seen it before."

On November 15, UnboxTherapy, the top technology blogger with over 18 million followers on YouTube, released an unbox video about HHOGene GPods, which are the world's first light earbuds, said that HHOGene GPods light earbuds bring "huge and immersive visual effects". 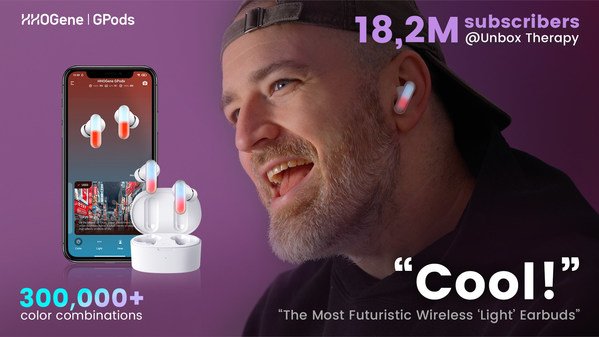 The host of Unbox Therapy Lewis said it was a very special unbox experience, because he has unboxed many headsets before, but this is the first light earbuds that can be customized to shine! He said it is "The Most Futuristic Wireless 'Light' Earbuds" and recommended HHOGene GPods to those who "want to stand out in the crowd", which generated a lot of interest and discussion among the netizens.

Lewis mentioned in the video that, "GPods is a new design for wireless earbuds, lights, multi-colored lighting effect that exists on the exterior of your earbuds for added style components."

"Earbuds are increasingly becoming the expression of one's style, a part of outfit, it is the only gadget that you wear outside your body. "

Talking about this, we should mention about the special features of GPods, it achieves over 300,000 color combinations through its self-developed app "HHOGene". GPods also support color photo capture, you can use the "HHOGene" App to take a photo or pull up a photo from your album, the algorithm will capture the colors from the picture, present them on the earbuds.

What's more, GPods give you freshness in a different way of earbuds shells, you can match the light earbuds with different themes. Lewis likes the "Skull" shells most, Now GPods have released the World Cup and Christmas Thematic Shells, which are very popular and hit the market.

The sound quality of GPods was also confirmed by Lewis, he exclaimed "It is perfectly responsive to the music...by far the coolest is pulse...it does response correct to the music. I don't know where I expectation were, but it is brighter and more obvious than I expected." For a new earbuds brand, that's extremely high recognization.

Not only Lewis, but also Mrwhosetheboss, who is another top YouTube blogger with over 10 million fans, said, "GPods are the next best earbuds on the market."

"When you want to stand out in a crowd, in a sea of very similar-looking earbuds, this is definitely going to the chief then. I just have not really seen it before."— Evangeline

"They do look pretty cool, I can wear them to the pub!"—JINL