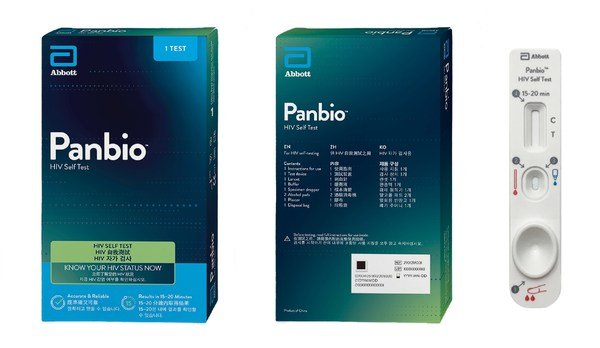 The Panbio™ HIV Self Test is a newly developed rapid, fingerstick blood test for the detection of HIV-1 and HIV-2 antibodies, the two types of HIV virus that can develop into AIDS. It can recognize patients as positive 1-14 days earlier than previous second-generation tests from exposure to HIV infection. Several peer-reviewed studies and meta-analyses have shown blood-based collection for HIV self-testing to be more accurate when compared to oral fluid (saliva) collection for rapid diagnostic tests.[1],[2],[3],[4],[5]

The number of HIV tests conducted in Hong Kong fell by 55.4% in 2020 compared with that in 2019, according to AIDS Concern Hong Kong. This was due to the closure and reduction in operational hours of testing centers due to COVID-19. People also chose to delay testing while the COVID-19 control measures were in place.[6]

"During the pandemic, progress against HIV slowed as resources were diverted in many areas. It's now time to escalate the fight against HIV by reaching more people, especially people who are reticent to seek care in professional environments," said Mr. Qiu Jianping, Greater China General Manager of Abbott Rapid Diagnostics.

There have been significant advances around human immunodeficiency virus (HIV) detection and treatment, yet stigma and fear of a positive diagnosis are the major reasons people avoid getting tested. This innovation brings a trusted and accurate self-test to the front lines of the HIV epidemic, enabling reliable detection of HIV in the privacy of people's homes or where they live, study, socialize and work.

According to a report by the Centre for Health Protection of the HKSAR Government in 2021, some people discovered that they were infected with HIV by coincidence. This reinforces the need for standardized testing: one in every 3,876 pregnant women was tested HIV-positive when attending public antenatal services; one in every 10,088 new blood donors was tested HIV positive.[7]

"Giving people the ability to test themselves conveniently and discretely in the privacy of their homes helps to prevent onward transmission of the virus and gets more people into the healthcare system where they can be treated and counseled," said Mr. Qiu.

The report by the Centre for Health Protection also showing HIV infection status in Hong Kong for 2021. Most (71.4%) HIV-infected people were diagnosed between the age of 20 and 49. Sexual contact contributed to 80.8% of all reported HIV cases, and majority of the HIV cases reported were male (82.1%).[7]

Global goals to reduce and end HIV are fast approaching. The Joint United Nations Programme on HIV/AIDS (UNAIDS) aims to diagnose 95% of all HIV-positive patients, provide antiretroviral therapy for 95% of those diagnosed and achieve viral suppression for 95% of those treated by 2030. And making fast, private, reliable testing accessible is critical to winning the fight to end HIV.

"While significant advancements have been made using antiretroviral therapy, which can reduce a person's viral load to levels that are undetectable, people can only take advantage of the therapy if they know they're HIV-positive—and that requires testing," said Mr. Qiu.  "The Panbio™ HIV Self Test is the first step in helping people determine their status and connect to care if necessary to get the best course of medicines and support."

The test is available for purchase at retailers, including HKTVmall and IHEALSMART in Hong Kong starting in November.

Abbott's contributions to the fight against HIV

The Panbio™ HIV Self Test builds on Abbott's decades of experience in researching and detecting infectious diseases, from developing the first U.S. HIV test in 1985 to recent leadership in making testing more accessible during the COVID-19 pandemic. Today, Abbott makes a variety of HIV tests that advance our ability to detect, monitor and track HIV across the core lab and at the point of care.

Abbott continues advancing the science around HIV, too. Through our global viral surveillance work, Abbott scientists, in 2021, discovered a high prevalence of HIV controllers – a group of people living with controlled HIV – without antiretroviral medications in the Democratic Republic of Congo. The discovery could hold the key to a cure in the future. Further, we announced the finding of a new subtype of HIV in 2019. This marked the first time a new subtype of HIV-1 has been identified since 2000. Abbott has since made the new sequence accessible to the research community to evaluate its impact to diagnostic testing, treatments and potential vaccines.

Global burden of people living with HIV must not be overlooked

HIV is the virus that can lead to acquired immunodeficiency syndrome, most commonly referred to as AIDS. The virus is transmitted by sexual contact, exposure to infected blood, certain body fluids or tissues, and from mother to child during pregnancy, delivery and breast feeding.

Since the beginning of the AIDS epidemic in 1981, 79 million people have been infected with HIV and 37.7 million people globally are estimated to be living with the virus.[8]  From this group, 6 million do not know they are living with HIV. Stigma is a major reason why people avoid getting tested.

Through affordable and convenient self-testing, the long-standing societal barrier of asking a health provider for an HIV test can be eliminated, making it easier for people who want to know their status and pursue treatment through antiretroviral therapy.

Trusted, accurate and easy-to-use HIV testing in the privacy of home

The Panbio™ HIV Self Test is for use by untrained lay users to aid in the diagnosis of HIV-1 or HIV-2 infection. The test recognizes individuals as positive 1-14 days earlier than previous second-generation tests from exposure to HIV infection,[8] helping to reduce transmission from earlier detection. In clinical evaluations of the self-test, when performed by lay users, the test demonstrated 95.1% sensitivity and 99.6% specificity and achieved 100% sensitivity and 99.9% specificity in professional setting.

The Panbio kit contains instructions for use, a device cassette, buffer solution, lancet and other necessary items to safely use and dispose of the test. To start the test, a fingerstick blood sample is collected and transferred by a specimen dropper to the cassette well where it is mixed with a drop of buffer solution.

Results are available within 15-20 minutes and read on the cassette device as indicated in the provided instructions. A positive result must be confirmed by a health care provider using appropriate confirmatory testing.

Panbio™ HIV Self Test is not intended to be used as an HIV screening test for blood donation.

Abbott is a global healthcare leader that helps people live more fully at all stages of life. Our portfolio of life-changing technologies spans the spectrum of healthcare, with leading businesses and products in diagnostics, medical devices, nutritionals and branded generic medicines. Our 113,000 colleagues serve people in more than 160 countries.

Connect with us at www.abbott.com, on LinkedIn at www.linkedin.com/company/abbott-/, on Facebook at www.facebook.com/Abbott and on Twitter @AbbottNews.