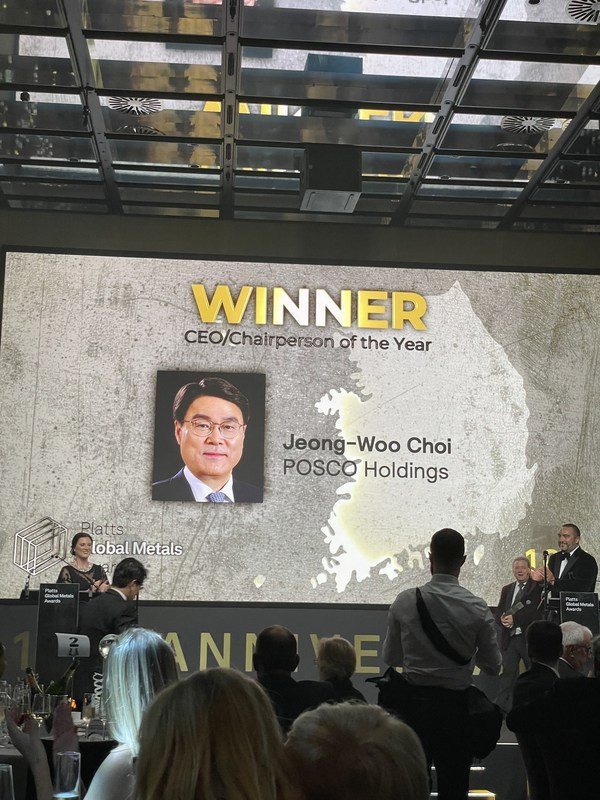 "Since established in a small fishing village in Pohang in 1968, POSCO has become one of the most competitive steel companies in the world today. This year, POSCO made a shift into a holdings company in order to step up for a world-class green materials provider. The honor of is the achievement made by the dedication of all the members of POSCO Group. I want to share the honor with entire executives and employees of the Group," said Choi.

CEO Choi was highly recognized for innovating the management structure by shifting into a holding entity, leading the Group's core new growth business, making strategic investment, and achieving the biggest performance since its establishment in 2021.

Since taking the office in 2018, he has steadily practiced the management philosophy of 'Corporate Citizenship' to turn POSCO into the ESG leading player and dedicated to enhance the credit rating from BBB+ to A-. He also earned a good reputation for his global leadership with the appointment as the chairman of the worldsteel.

With the award, CEO Choi became the first East Asian winner of CEO of the Year, which was regarded exclusive for the American and European CEOs in the steel industry, recognized for the global management capability.

POSCO Group made a splendid achievement of winning four awards including 'Metals Company of the Year', 'Industry Leadership Award : Steel' and 'Deal of the Year' as well as 'CEO of the Year'.

The 'Metals Company of the Year' goes to a company who delivered the greatest achievement in the steel, metal, and mining industries. This year, POSCO Holdings won this award for setting up a clear target for carbon neutrality and conducting a leadership as a world-class green materials provider going beyond the steel business, amid the challenging business environment including the pandemic, global trade protectionism, and supply chain risk.

POSCO was award 'Industry Leadership Award : Steel', recognized for declaring the carbon neutrality as the first Asian steel company, pushing for investment and technology development and achieving the greatest performance since its founding. As a result, POSCO became the first company which won the 'Greatest Steel Company' three times in 2018, 2020 and 2022.

Meanwhile, CEO Choi was inaugurated as the 44th chairman of worldsteel on 18th October at the general assembly with a mission of leading the global steel industry for the upcoming year.

POSCO Group CEO, Jeong-woo Choi, to take office as Chairman of worldsteel, leading a great shift for the steel industry to go green