SHENZHEN, China, Nov. 18, 2022 /PRNewswire/ -- Widely known for its discrete design, highly rotatable front lens, separate interior lens which is especially helpful for ride-givers who want to keep an eye on the backseat, A139 3CH was once the first 3 channel dashcam with 5GHz Wi-Fi in the market.  As a pioneer in dashcam imaging, VIOFO never stops innovation and unveils a long-awaited 4K series, A139 Pro 1/2/3CH, with A139 Pro 3CH being the first real 4K dashcam supporting 3 channel recording. What else comes along with it? 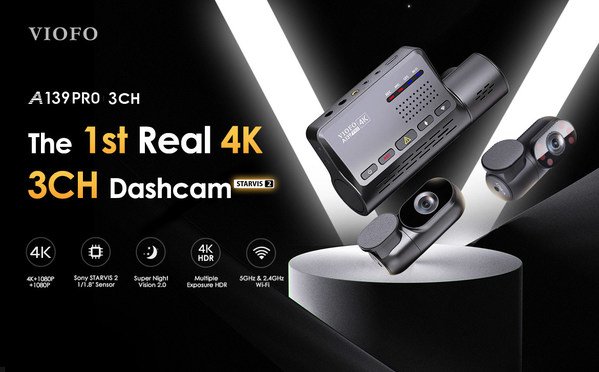 Being the first in the industry to deploy the newest Sony STARVIS 2 technology, A139 Pro series supports up to 4K UHD 3840*2160P front recording in all 1CH/2CH/3CH options, powerful enough to outbeat most 4K dashcam competitors with massively upgraded image clarity and accuracy in license capturing. And for users who prefer full coverage in 3 channel recording, they will no longer be bothered with front 4K downgraded to 2K because A139 Pro 3CH is the first dashcam supporting real 4K front + FHD interior + FHD rear recording.

Both STARVIS &STARVIS 2 technology deliver excellent performance in low-illumination monitoring. But Sony latest technology STARVIS 2 IMX 678 image sensor offers a much wider dynamic range in a single exposure than the STARVIS pixel of the same size. Adding that IMX 678 has a bigger image size with type being 1/1.8'', the 4K A139 Pro series brings much less noise and motion blur during day & night recording, making license capturing a lot easier than before.

Night vision has always been a headache with all dashcams especially for 4K models. Comparing with the night vision performance of other 4K dash cams, A139 Pro is second to none. Image sensor type 1/1.8'' with larger pixel brings in more light under same illumination level and revolutionary 4K HDR tech automatically balances over dark and over bright areas to protect 4K details recorded at night.

Built with F1.6 aperture, 7 elements glass lens, the interior camera features six infrared LED lights, allowing the camera to record the cabin in detail even in complete darkness, which is one extremely vital feature for commercial and Uber drivers to avoid unnecessary disputes.

A139 Pro series is built with super slim coaxial cable and miniature connectors. Compared with the traditional rear cable, it's more user-friendly for installation and can be better hidden on the car roof while highly reducing electromagnetic interference to other in-car electronic devices such as car multimedia system.

Same as the recent A229 Duo, an upgraded 5GHz Wi-Fi module is built into A139 Pro series too to provide 4 times faster data transfer, ensuring smooth video previewing, downloading and sharing. The downloading speed could make a huge difference when one is caught in an accident and required to present evidence to the police on site to prove innocence.

The front 4K camera lens of the A139 Pro series provides nearly 300° of smooth rotation, which adapts better in different car models for optimal positioning and can be even used for vlogging purpose with the front lens turning to cabin.

In most cases, a dashcam shall be working quietly, but there could be important clips missing if there are no alerts at all when a recording issue occurs. A139 Pro series comes with voice notification in multiple languages to clearly notify you of setting changes or memory card errors, keeping you fully focused on the road whist having knowledge of the recording status.

Different from most VIOFO dashcams, A139 Pro series has CPL Filter included as a standard pack. A circular polarizing lens (CPL) filter can be used to reduce reflections and glare off glass and road surfaces, bringing significantly improved image clarity and contrast.

All In One, New Hunting Horizons -- InfiRay Thermal+ is released