KUALA LUMPUR, Malaysia, Nov. 17, 2022 /PRNewswire/ -- One of the biggest esports tournament in Southeast Asia, the Southeast Asia Cyber Arena (SEACA) organized by UniPin is back this year. SEACA 2022 will present various tournaments and a series of interesting events starting from November 15 to November 27, culminating in a tournament with a total prize pool of USD30,000. 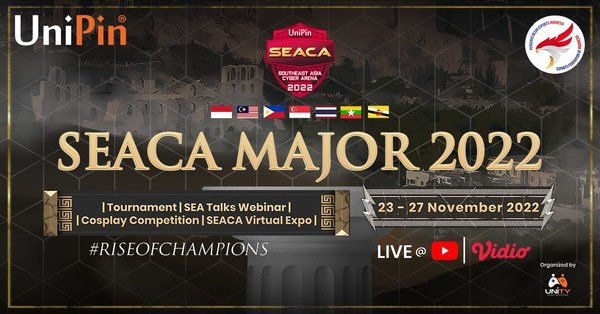 One of the biggest esports tournament in Southeast Asia, the Southeast Asia Cyber Arena (SEACA) organized by UniPin is back this year.

The SEACA MAJOR Tournament will be the highlight of the UniPin SEACA 2022, which covers a PUBGM competition for 33 selected teams from various Southeast Asia countries, with 17 teams that will go into the open tournament category and 16 for the ladies tournament. Some of the teams that will compete in SEACA MAJOR are EVOS, RRQ, and BTR Morph. All of the teams will represent each of their countries; Indonesia, Philippines, Malaysia, Thailand, Brunei Darussalam, and Myanmar.

In addition to the PUBGM tournament, other competitions that will brighten up the UniPin SEACA 2022 series of events are the Magic Chess tournament and the Cosplay Competition. As many as 256 participants will compete in the Magic Chess Tournament. In the cosplay competition, 25 cosplayers will fight to win the judges' votes consisting of John Switch (Indonesia), Rithenia (Singapore) & Hakaosan (Philippines) to become the winner.

Not only that, UniPin SEACA 2022 has also prepared SEA Talks for fans who want to explore more about this industry. The webinar series, which will take place from November 15th-23rd, will discuss the hottest topic in the industry presented by international well-known speakers such as Garry Ongko Putera (CEO of BOOM Esports), Jab Escutin (COO of Bren Esports), and many others. SEA Talks is open to public so anyone may participate in it.

Ashadi Ang, CEO of UniPin explained that SEACA 2022 aimed to pave the way for gamers to be a champion not only in this region, but also prepare them to be ready globally.

"With SEACA, we want to bring gamers, including men and women, to be able to compete on an international scale. We want to give them the opportunity to hone their skills, confidence, and competitive sense so that they can compete, not only in SEACA, but to also become champions in other international tournaments," Ashadi said.

All up-to-date information can be officially accessed through unipin.com/SEACA2022, and the official Instagram accounts @seaca.gg and @unipinindonesia.

UniPin, Domino's Pizza, and Genshin Impact Creating a Joint Collaboration to Provide a Special Offer Combo for Gamers in SEA