Has "K-Innovation" succeeded on the world stage? Startup Dot wins Best of Innovation award at CES 2023 for "Dot Pad"

SEOUL, South Korea, Nov. 18, 2022 /PRNewswire/ -- Dot (co-founders: Eric Ju Yoon Kim and Ki Kwang Sung), a member of the Born2Global Centre (CEO Kim Jong-kap), and a startup that develops devices and software for the visually impaired, announced November 17 that its "Dot Pad" won the Best of Innovation award in the "Accessibility" category at CES 2023. Dot became the 15th certified B Corp in Korea four years ago, joining the ranks of other global heart-forward companies and further fortifying its aspirations toward increasing accessibility for the visually impaired.

The Dot Pad was nominated as the finalist in three categories—Accessibility, Mobile & Devices, and Virtual & Augmented Reality—and awarded in all three.

The CES Innovation Award, granted by the National Consumer Technology Association (CTA), is conferred for innovative technologies and products that are expected to lead the world and is viewed as the highest honor of the Consumer Electronics Show (CES).

Since its founding in 2015, Dot has developed various assistive devices using its independently developed core technology, "Dot Cell," and introduced the world's first tactile display, the Dot Pad, in 2021. The Dot Pad consists of 2,400 pins arranged in a pixel-like grid that can quickly be set in up or down positions, reproducing letters in braille or easily identifiable shapes, symbols, tables, or charts stored on PCs or mobile devices. To recognize the image displayed on the Dot Pad, the user simply needs to touch it with his or her fingers. The device is expected to increase accessibility for the visually impaired in various areas of daily life such as education, music, and entertainment.

Dot collaborated with Apple to have the Dot Pad update included in the iOS 15.2 update last December. Now, the Dot Pad integrates directly into Apple's VoiceOver screen reading feature, enabling visually impaired users of iPhones or iPads to read text, icon labels, and even graphs or simple images with just a simple touch. Besides Apple, Dot is working on innovative projects with companies, organizations, and research institutes around the world.

Dot co-founders Eric Ju Yoon Kim and Ki Kwang Sung said, "We are grateful that the value of the world's first tactile display has been recognized worldwide, and we hope this will serve as an opportunity to bring more attention to education for the blind and the work environment around the world."

Meanwhile, Dot is working closely with American Printing House(APH) and Humanware in education for the visually impaired in the United States through their unique technology. They are ultimately aiming to help rehabilitate people with acquired visual impairment and increase work productivity by facilitating access to essential office programs such as Excel and PowerPoint in the workplace through collaboration with Apple and NV ACCESS. Dot's continuous research is expected to change the education and work environment of the visually impaired around the world. 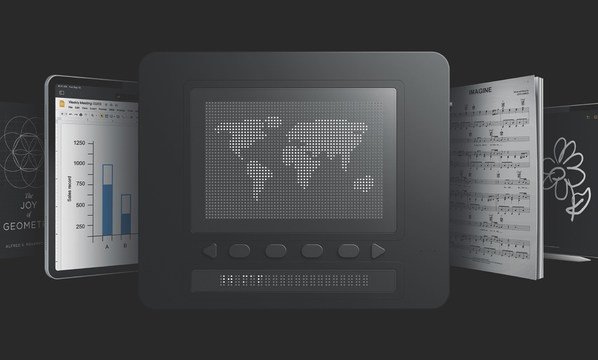 Graphics such as shapes, symbols, tables, and charts stored on PCs or mobile devices are output on the tactile display.

Founded in 2015, Dot has commercialized products such as the Dot Watch, Dot Pad, and Dot Kiosk. The company has focused its business on the "social" component of ESG and introduced innovative solutions to social problems through its technological advancements in domestic and overseas markets. As of November 2022, Dot has attracted KRW 25 billion in Series B investment and acquired 130 patents in Korea and overseas.

The Born2Global Centre, operated by Born2Global, is a full-cycle service platform that supports the global expansion of promising companies. Established in 2013 under the Ministry of Science and ICT, Born2Global has been setting the standards for a successful startup ecosystem in Korea and continues to expand and transform startups so that they are engaged, well equipped, and connected with the global market.