BEIJING, Nov. 17, 2022 /PRNewswire/ -- Chinese and Thai Gen Zers had riveting exchanges of ideas about topics related to shared prosperity in Asia, industrial frontiers, and intercultural communication at the Dialogue Between Chinese and Thai Gen Zers jointly hosted by Global Times Online (Huanqiu.com) and the Chinese Embassy in Thailand on Nov.15. 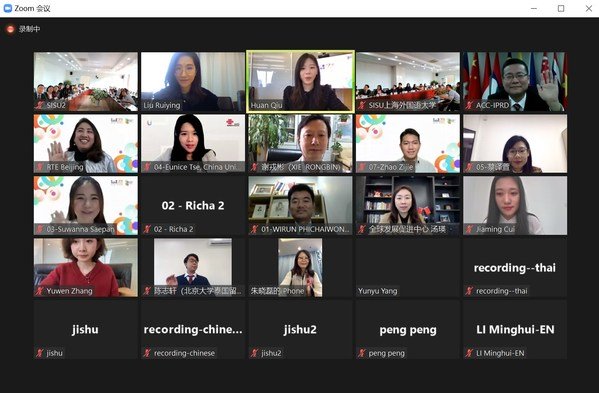 A screenshot of the Dialogue Between Chinese and Thai Gen Zers held on Nov. 15.

In addition to Gen Zers, the event, which was held both online and offline, was also attended by senior officials, media experts, and executives of enterprises. Among them, Ambassador of Thailand to China Arthayudh Srisamoot and Shi Zhongjun, Secretary-General of the ASEAN-China Centre (ACC), delivered video speeches to the dialogue.

Srisamoot praised and expressed great expectations of Chinese and Thai young people's efforts to enhance mutual understanding and trust in his video speech. He called on Gen Zers to continuously pay attention to and make concerted efforts to contribute to close cooperation between China and Thailand.

Shi pointed out that the world wishes to hear voices from Asian countries such as Thailand and China on solidarity for economic recovery and common development.

Young people of the two countries should take the dialogue as an opportunity to strengthen communication on issues of shared interest and to learn more about each other, he added.

Wirun Phichaiwongphakdee, Director of the Thailand-China Research Center of the Belt and Road Initiative, made a speech on the role of a planned railway linking China, Laos, and Thailand in enhancing regional connectivity in fluent Mandarin.

He stressed that Thailand should get deeply involved in the top-level design of China-ASEAN cooperation and join the efforts to build the China-ASEAN community with a shared future.

Xie Rongbin, Deputy Editor-in-Chief of Global Times, said Gen zers should give full play to their advantages and actively think about ways of strengthening bilateral ties and deepening connectivity between China and Thailand with the focus on improving infrastructure and constantly expanding fields of cooperation for Asian countries, thus injecting fresh impetus into the development of the two countries and Asia.

Monrada Yamkasikorn, First Secretary of the Royal Thai Embassy in Beijing, said that young people are expected to actively share their views via more platforms and channels, and meanwhile continuously promote communication, mutual understanding, and cooperation between China and Thailand.

"Youth Power" Invites Cross-Straits Gen Zers to Share a Bright Future: We are Always One Family