HARBIN, China, Nov. 17, 2022 /PRNewswire/ -- Harbin, the capital city of China's northmost Heilongjiang Province, has opened its arms and extended a warm invitation to the world with its ice and snow culture, natural scenery, iconic architecture, and modern music, according to the municipal government. 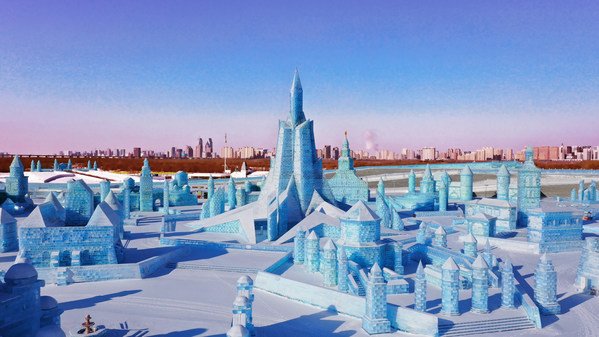 Harbin is renowned for its ice and snow culture, vividly displayed in Harbin Ice and Snow World.

The city is renowned for its ice and snow culture, vividly displayed in Harbin Ice and Snow World. For those who want to know what it's like to be surrounded by hundreds of thousands of cubic meters of ice and snow, the best way is to come and feel it. Stairs, walls, railings, palaces, and castles are all made of ice.

At Sun Island International Snow Sculpture Art Expo, there are all kinds of extraordinary snow sculptures, some of which are as tall as nearly 10 stories. The ice and snow are made into unique artwork, as well as people's daily lives.

The story of Harbin starts from its mother river "Songhua River", which originates from Tiānchí "Heaven" Lake in Changbai Mountain. While running through Harbin, the river has also brought vitality to the city. Harbin area is also the birthplace of the Jin and Qing dynasties nearly 1000 years ago.  The population grew, and villages developed along the Songhua River.

At the end of the 19th century, this once-small fishing village began to evolve with the fall of the sleeper of the Middle East Railway. Harbin has become one of the few cities with railways and was given a new name, "the city pulled by trains. Harbin, rapidly internationalized, has quickly become a metropolis meshed with eastern and western cultures.

When people visit Harbin, their first stop is to go straight to Central Street. This 1450-meter-long street is more of a museum of architecture. Architectural styles such as Baroque, Renaissance, eclecticism, etc., and influential architectural schools in the history of western architecture can be found here.

St. Sophia's Church, two blocks away from Central Street, was founded in 1907. When it snowed, entering the Church with red bricks and green roofs was like entering a fairy tale.

Laodaowai, dubbed "Chinese Baroque Street," is another must-see. The architecture here is in the form of Baroque on the outside, but the layout of the Chinese courtyard is on the inside. The outer wall's relief symbolizes the grain harvest, the prosperous and auspicious peony, and so on, which has a beautiful meaning in Chinese.

Harbin, a city known for its love of music, is recognized as a "Music City" by UNESCO. At the end of the 19th century, opera, ballet, and jazz were introduced to Harbin. The first batch of conservatories and symphony orchestras in China were born here, which made Harbin one of the birthplaces of modern music in China.

Dujiangyan flourishes as a model for ecological civilization